The producer poured himself into the piano, opening up a world of songwriting freedom that you can hear on his sophomore album, Apricity 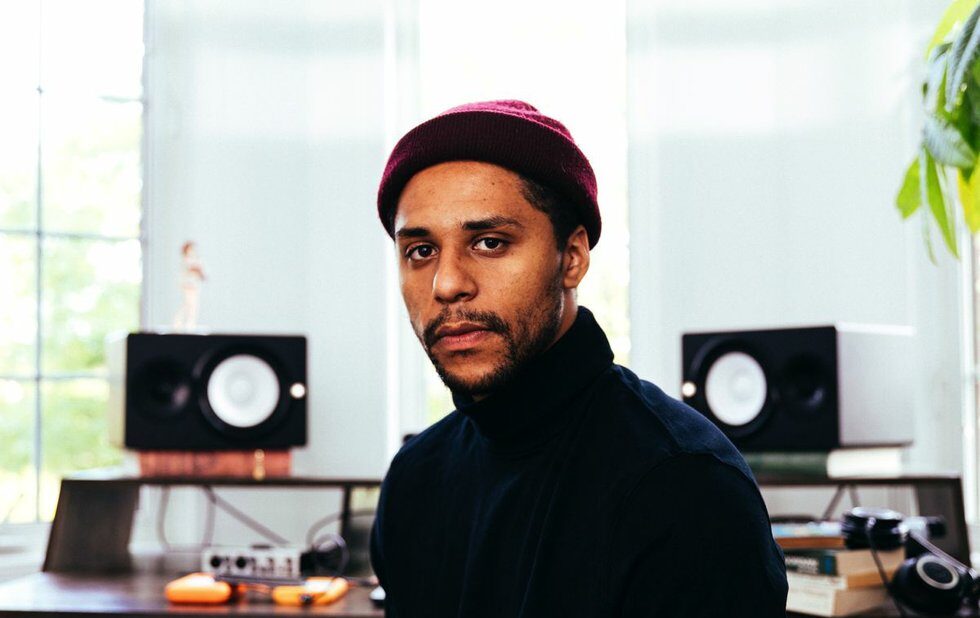 Last week, a mix of friends and industry gathered at Parkdale’s Northern Contemporary Gallery for the launch party of Toronto electronic producer Harrison’s sophomore album, Apricity (Last Gang). Guests wandered the cozy space and sipped on tall cans, surrounded by an inventory of artist supplies. Out in front, graffiti artist BACON was redecorating the exterior of a Toyota Celica Supra in washes of white and blue, and scrawling it with the ribbony cursive that often adorns Harrison’s records.

It was a proud moment for Harrison Robinson, who says Apricity is the album he’s always wanted to make. But it came out of a period of severe creative doubt that threatened to sideline his music career for good.

“I almost wanted to give up on music,” he reveals over the phone. “Not give up entirely, but it left me thinking that maybe this isn’t for me.”

It was seeing his contemporaries on social media studio-hopping and recording new music on the daily that had him questioning his own dedication. “I love music so much but I can’t be that creative every day. That’s when I started thinking I’m just not made for that kind of lifestyle,” he says.

From a distance, it’s hard to believe Harrison could feel like his work ethic doesn’t measure up – his 2016 debut album, Checkpoint Titanium, earned the then-21-year-old a Juno nomination – but impostor syndrome doesn’t discriminate.

He says those feelings of inadequacy made him feel depressed, but he eventually turned his perceived limitations into an opportunity to learn. He put his attention to refining his piano skills, painstakingly teaching himself over six months.

“Of course it’s a 10,000-hours thing and I’m not even near that, but to be able to sit down and write a chord progression, to be able to solo, to have more than a basic understanding of theory and musical structure gave me more confidence. And with that confidence, I started to write the album.”

It opened up a world of songwriting freedom to the producer, allowing his compositions to become less dependent on loops. That also meant the songs could be purposefully arranged for live performance. Though Harrison is mostly known for his massively fun DJ sets, he’s hoping to eventually perform the songs with a full band.

The album’s sound fell into place once he’d written opening track Celica Supra. There’s a lower fidelity to its ticking-time-bomb drum beat and driving synthy funk, evoking both melancholy and warmth. After all, the album is named for the warmth of the sun in winter, a brief break from the usually grey, overcast skies that become more frequent as the days get shorter and shorter.

Without explicit direction from Harrison, vocalists Aaron Tiem and Daniela Andrade homed in on the sombre blue tones and glimmers of optimism while writing lyrics. “When it comes to writing lyrics I try to stay out of it and give vocalists their creative space,” Harrison says.

Moody songs like Believe In Love and Better would fit comfortably alongside 80s R&B and sophistipop tracks by Sade or the Blue Nile.

Harrison admits it’s a kind of imagined nostalgia, since he wasn’t alive during the decade he’s referencing. The Supra might be considered a classic 80s car, but the road on Apricity is paved in streaks of his own brilliant neon.

Dense with references to waves, like the sustained sinuous synths that act as the wake between Celica Supra and Atmosphere, the record has a contemplative nature also built from Harrison’s own lived nostalgia, albeit from a later time period.

“When I was a kid, I would go up to my cottage in Georgian Bay every summer,” he says. “I remember being happy just sitting and looking at the water. It was just super-nice and calm.”

Although the soundtrack to those summer months wasn’t the Sade records Apricity evokes (more like soulDecision, says Harrison), that sense of calm was a reference point for the record and cover art he designed himself. Centred on a stark white sleeve is the striking azure of a body of water bouncing sunlight in a million directions.

“I’ve always loved the way the water glistens when the sun hits it,” he muses. “The way it was taken on film, the way it glistens, it’s like a moment in time that doesn’t feel stuck and can age well.”