NOW MagazineMusicGhosts of the past

Ghosts of the past 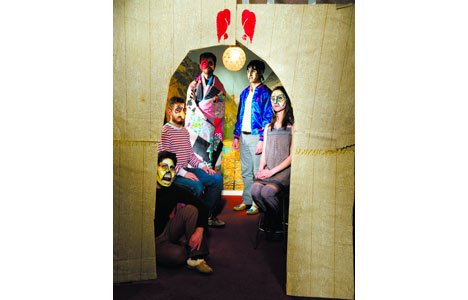 That the lives of guitarist/singer Shane Ghostkeeper and drummer/singer Sarah Houle have become intrinsically intertwined probably comes as no surprise to the northern Alberta Métis community from which they hail.

“There were always constant romantic fantasies in the community about me and Sarah,” chuckles Ghostkeeper, on coffee break from his job as an arborist in Calgary. “People thought the two of us would be charming together. But neither of us was into being set up. And we’d never even met.”

That changed when Ghostkeeper moved to Edmonton for hockey and school. Houle was there, too, and he spotted her in the stands during a game, having no idea who she was.

Now, over a decade later, the two musicians who make up Calgary-based Ghostkeeper (along with bassist Scott Munro and guitarist/producer Jay Crocker) are about to embark on their first cross-Canada tour, in support of their self-titled second album. Out on Flemish Eye, it’s a potent potion of weird and gritty country-music-informed blues-folk.

Their tight-knit Métis community continues to influence them, particularly in songs like Tea And Cree Talking and Métis Running. The lovebirds wouldn’t have it any other way.

“The main thing Sarah and I are trying to get across is that Métis people are contributing to modern society,” says the soft-spoken musician. “Métis people are modern people. We’re not stuck in the past, the way Hollywood stereotypes make it seem.”