NOW MagazineMusicGordon Lightfoot is NOT dead

Gordon Lightfoot is NOT dead 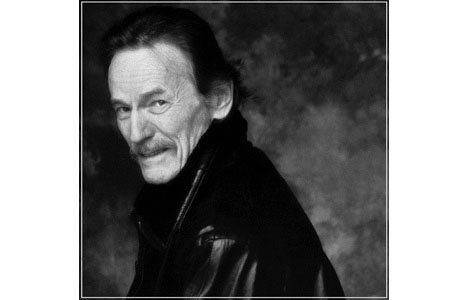 Gordon Lightfoot is not dead.

Contrary to what the Can-West newspaper chain has been reporting today, Canadian icon Gordon Lightfoot is not dead. When we first read the reports we figured we should make sure, so we called his manager, who told us immediately that it’s a hoax. Lightfoot is in fact alive and well, and has been in contact with people this afternoon. You might think that a national news chain might do a bit of fact checking themselves, but then again, newsroom budgets have been slashed pretty much everywhere, and there’s only so much you can cutback before facts start to suffer.

The one question that remains, is who is pretending to be Ronnie Hawkins and prank-calling newspapers?[rssbreak] 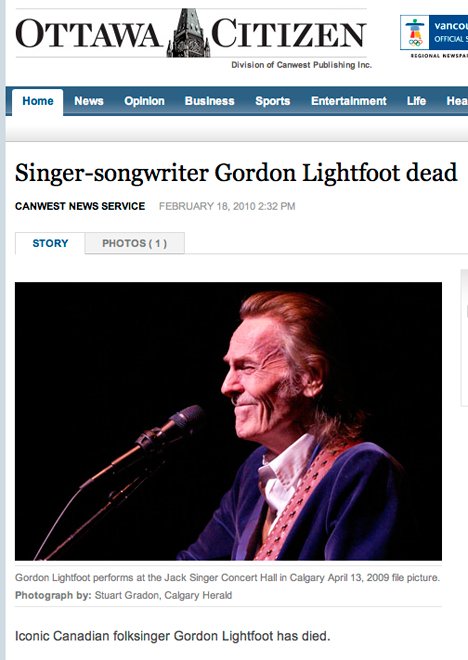 Here’s what Canwest was reporting. They’re currently erasing evidence of their goof.

Lightfoot died Wednesday night, according to his friend and fellow musician Ronnie Hawkins.

“He died last night, I’ve had a couple of phone calls already,” Hawkins said Thursday from his home in Peterborough, Ont.

Born in 1938 in Orillia Ontario, Lightfoot began his singing career at the tender age of five by performing I’m a Little Tea Cup at his local church.

He would later take up piano and the drums, and sing in a variety of bands, including a barbershop quartet – all of which would lead to a career as one of the world’s most beloved folk-rock singers and a Canadian icon.

In a career that spanned over six decades, Lightfoot became famous for his deep, distinct voice and poetic lyrics. He emerged as one of the premier singer-songwriters of his generation and was heavily influenced by the likes of Bob Dylan and Leonard Cohen.

Some of Lightfoot’s most famous songs include If You Could Read My Mind, Sundown and The Wreck of the Edmund Fitzgerald.

With files from Victoria Times Colonist