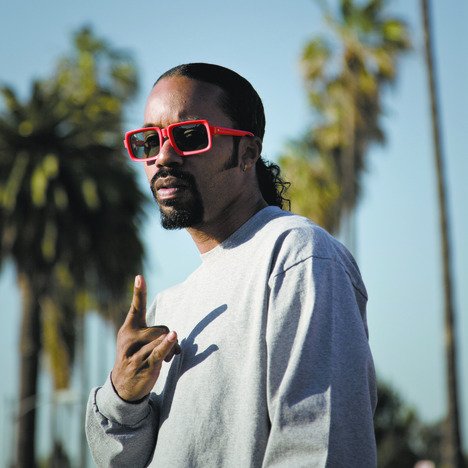 Read some of the press about Dam-Funk and you might think he’s some kind of deity.

The L.A.-based musician’s mythology has snowballed to the divine level, each description grander than the last.

He’s the ambassador of boogie funk, the keytar hero, gifted with having been “born with the funk.”

And finally, the apex of hype: a Fader cover story last fall crowned him “god of funk.”

“Nah, I’m not the god of funk, uh-uh,” he says, speaking in an unmistakably West Coast drawl from his place in L.A.

“I’m just trying to continue the funk into the new millennium and not let it be forgotten.”

And when it comes to that mission, Dam-Funk is damn serious.

The sheer quantity of the music makes a statement. Each disc is a concept album that represents a mood or theme, all unified by “the beautiful sound of funk where you can hear beautiful chords,” best heard in the genre’s offerings from the late 70s and early 80s.

Dam-Funk, who honed his style in the mid-90s as a session player for gangsta rappers like Ice Cube, Mack 10 and MC Eiht, relies on drum machines, synths, vocoders and keytars.

The end product is a dynamic mix of the hard and romantic, a sonic spectrum dominated by reds and purples. It’s beautiful. And bottomless.

Asked why he wanted to drop so much music all at once, Dam-Funk’s laid-back tone intensifies.

His voice continues to rise, his response becoming a rant.

“Sometimes I see on these stupid-ass blogs, they say, ‘How dare he make a box set.’ Fuck them, man. The funk genre deserves something like this, the respect that’s long overdue.

“So I’m not afraid to put myself on the totem pole and potentially be whipped into submission because of something like this.

“I’ll never submit, because I’m doing this all for the funk, man.”

Dam-Funk explains how his music “modernizes” the funk

On his memories of working with West Coast rappers like Ice Cube and W.C. in the 90s

On what to expect from his live show

His video for Mirrors, from his five-disc debut album, Toeachizown (Stones Throw)