Calling the death of music genres is dead 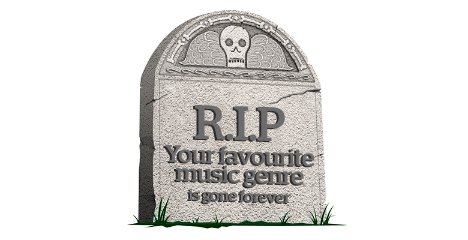 For most of the 00s, it looked like the age-old music critic game of declaring genres dead had been killed off (no pun intended).

Thanks to ye olde internet, styles of music that had been labeled “over” by the industry kept proving the powers-that-be wrong, mainly by providing an outlet for the creative underbelly of forgotten sub-cultures to sidestep the expectations of the machine and prove that they were in fact still valid and surprisingly fertile in many cases. Just look back over the past decade at all the zombie genres that rose from the dead to infiltrate the consciousness of the masses – metal, house, punk, no-wave, garage rock, country (we could go on for a while here).

Only in this environment could the New Yorker‘s Sasha Frere-Jones get so much attention for his declaration that hip-hop died in 2009. Initially, it seemed like his thunder had been muffled fairly effectively by Das Racist’s harsh and irreverent rebuttal. As the band point out, a changing genre is not the same as a dying genre – if anything it’s proof of the opposite. More importantly though, was their proclamation that the “the study of genre is largely the study of marketing”, which should have revealed the irrelevance of the entire debate. Now, more than ever before, the average listener cares very little about artificially constructed genres, and this is a good thing.

Well, it seems the issue still has legs, as the Guardian‘s Simon Reynolds has chimed in a month after the fact, supporting Frere-Jones’ hypothesis that hip-hop has exhausted its creative possibilities and is just treading water right now, a shadow of its former self.

Like Frere-Jones, Reynolds leads off with quotes from actual rappers about the demise of the genre, as a way of saying “hey, it’s not just us academics that are saying this”, and seems to be offended at the suggestions by folks like Das Rascist that the kids are in a better position to comment on the form than middle aged white music critics.

Fair enough, but then (like Frere-Jones), he gets bogged down in so many caveats that by the end you have no idea what he’s actually trying to argue. You can’t really convincingly claim that the genre is stagnant, and then go on to list all the new street level mutations and youth-driven crazes that have developed over the past few years.

In the second-last paragraph of Reynolds’ essay, he finally starts getting to the heart of the problem with declaring hip-hop (or any other genre) dead.

“People now seem to feel that “no genre ever really dies” (to adapt the Neptunes/NERD motto). Was this in fact one of the problems with the Noughties? No genre went gently into that good night: they all clung on, cluttering up the musical landscape.”

But how is that a problem? Well, Reynolds seems to believe that you have to let genres die to allow new ones to flourish.

“The very vitality of a form of music implies the possibility of its eventual death.”

This is an interesting hypothesis, but one would think that someone who’s interviewed hundreds (if not thousands) of musicians over the years would realize that nothing comes from nothing, and that long before the 00s, the most creative people have always mined the entire history of music. If musicians only cared about the current dominant forms, than art would change and progress in baby steps, not the huge shifts and leaps we’ve become accustomed to. If punk had truly died in 1979, Nirvana wouldn’t have happened. Instead, Kurt Cobain would have probably been making a slight variation on hair metal, instead of reaching into the larger history of underground rock and coming up with something genuinely new and exciting. Of course grunge was supposed to have killed off metal, but that didn’t quite work out, did it?

There’s a reason that “death of…” posturing has gone out of style – mostly because such proclamations have always been proved wrong. Disco was supposed to have died almost 30 years ago, punk has been declared dead every few years for decades, rock ‘n’ roll was supposed to have been killed off innumerable times by now, and even rave has proven to have way more longevity than anyone could have guessed, even if it tends to go by different names now. Hell, there’s even a small number of artists successfully reimagining early 20th century American music and making those dusty old chord progressions and lazy swing sound new and vital.

By the end of Reynold’s essay, he appears to have talked himself out of his original support of Frere-Jones. Basically he admits that hip-hop isn’t dead, and that he knows the kids will come up with a new take on it eventually, once they get bored of the current dominant state of the genre. On this, he’s getting closer to the truth.

There is nothing to worry about.

Hip-hop (like any other genre), will continue to go through periods of stagnation on a mainstream level (otherwise known as “success”), which then fosters creativity in the underground in response, which then rises up to wipe the old guard off of the charts. It’s impossible to talk about a genre as a monolithic beast – there will always be experimenters and there will always be traditionalists, and both have a role to play. All Frere-Jones and Reynolds are describing is their distaste for the current generation of experimenters and traditionalists, which says more about them than it does about the music itself. Get rid of your expectations of what hip-hop should be, and it should be apparent that there’s still a lot of life in the old girl yet.