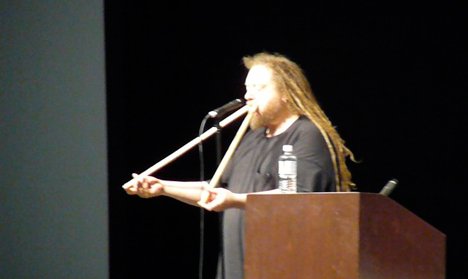 With fiery red dredlocks flailing about, a huffing and puffing approach, and unbridled enthusiasm, Jaron Lanier seemed almost unhinged at his SXSWi talk.

Lanier’s focus I would characterize as barely stream-of-consciousness. He stayed on one topic for barely 30-seconds, then seemed to wander into his next seemingly random topic.

But the talk was refreshingly overloaded with ideas.

Lanier, author of You Are Not A Gadget, raced through pretty much all the Web 2.0 conversations – from open Internet to Facebook to iTunes micropayments – so fast it was hard to keep pace.

Compare his talk to another Internet guru, the always on-message Clay Shirkey, and it’s hard to believe they’re talking about the same arena. Whereas Shirkey has a measured, usually singular focus, Lanier was bouncing around topics like a high bounce ball.

Often critical of Web 2.0, Lanier began the talk by asking everyone to put down their iPhone and stop Twittering. This, the message of his book, didn’t go over so well, but turned out to be wise. He needed full attention.

He did put forth one argument that stuck: Facebook, in the grand scheme of things, doesn’t not allow for much person actualization.

He used the example of reinvention. Imagine Bob Dylan before he was Bob Dylan. He moved from Minnesota as Bob Zimmerman. Had he been on Facebook during that time, people in the East Village where he performed would’ve simply dismissed him as Bob Zimmerman, the dorky Jewish kid from Minnesota. Dylan was allowed to reinvent himself because he was allowed to forget or let go of his past self.

A teenager growing up with Facebook has a more difficult time doing that.

Lanier said Facebook was great if you had already made life’s connections, mistakes or accomplishments, but was not if you are too young to do that.

An essential part of being is inventing yourself, through trial and error, and eventually reinvention you become a fully formed adult. With the structured approach of Facebook, that part of life is limited.

It was a heedy topic, to say the least. But Lanier made the most of it in the 90 seconds or so he spoke about it.

To cap off the harried presentation, Lanier demonstrated you can’t learn everything off the Internet by whipping out a strange Ukrainian instrument he claimed can’t be found anywhere anymore. And then he played it.[rssbreak]