Medallions move out of the shadow of controller.controller 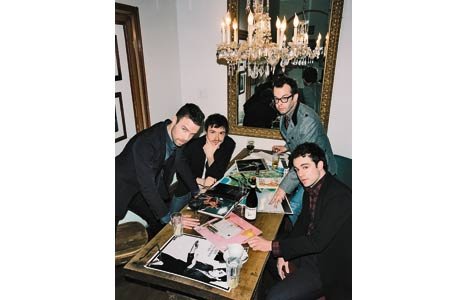 The first thing you should know about Medallions is that it’s the new band from controller.controller guitarist Scott Kaija. The second thing is that the first isn’t very relevant to his current project.

“I’d be quite happy not to talk about it,” Kaija says over pints at a west-end watering hole. “I realize that once we get a few interviews out of the way people will stop talking about it, and I guess it doesn’t hurt for getting a bit of attention.

“But the two bands really don’t have anything to do with each other.”

He’s not wrong about that. If you’re looking for a post-punk dance music fix, check out Lioness, featuring the controller.controller rhythm section. Medallions, on the other hand, play straight-up indie guitar rock that borrows liberally from the last 30 years of fuzzed-out guitars and mumbled vocals.

Not long after controller.controller’s 2006 demise, the members of Medallions started writing songs together in the house they share. They’ve taken their time developing the project. It was a full year before they played live, and they still haven’t officially released anything.

That’s a big change from the whirlwind of touring and recording that burned out Kaija’s last band. Living and recording in the shared house allows the four-piece to let their songs develop organically.

“It’s not like a typical band where you go to a space and jam,” drummer Mick Jackson says. “We all live together, so at any point something can come up and we can work on it.”

“It definitely feels like more of a band effort than anything I’ve been involved with before,” Kaija adds.

So will they bypass the big studio experience come album time?

“It is quite conceivable that we’ll do it all ourselves,” Kaija says. “I don’t even know which studios are still around at this point. All the ones that I previously recorded at are gone now – turned into condos.”

Kaija and Jackson talk about how the their shared living accommodations shape their music and influences: