AIDS Wolf lose a member but soldier on as a trio 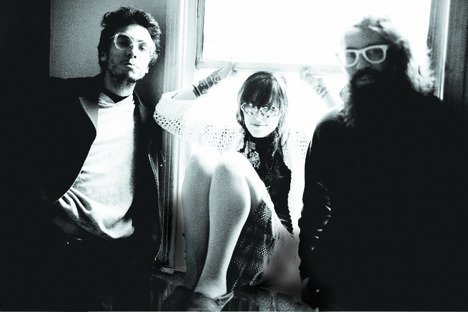 Little about AIDS Wolf’s cacophonous aural assault suggests uniformity, yet the frenetic noise rock band has fallen victim to the oldest musical cliché: love. Last July, guitarist Myles Broscoe announced he was quitting to live with his girlfriend in London.

“It’s a bit disappointing and frustrating,” sighs vocalist Chloe Lum from her Montreal studio. “But I can’t say I’m surprised. It’s not the first time we’ve lost a bandmate to domesticity.”

Rather than find a replacement for the lovelorn guitarist, the band decided to reconfigure and continue as a trio. Scrapping all their old songs, the group will unveil a set of entirely new material tonight at the Garrison.

“The idea of playing our old songs with one guitar just seems absurd,” says Lum. “Part of the defining aesthetic of this band has always been the interplay between the two guitars.

“We didn’t want to spend all this energy rearranging old songs to make them work as a trio and potentially be not as good, so we called off our tour plans and stayed home to write.”

Those who consider AIDS Wolf’s sprawling catalogue of 7-inches and albums, including last year’s Dustin’ Off The Sphynx (Skin Graft), nothing but amorphous chaos might be surprised to learn that the songs are meticulously rehearsed long before they reach the stage. The band won’t even think about heading into the studio until new material is fully road-tested.

Ironically, paring down has expanded the band’s sound. To compensate for the lost guitar, they’ve adopted a complicated effects rig to heavily process the formerly “clean” guitar and vocals. (“We actually have more equipment as a trio than we had as a four-piece,” Lum notes.)

But if you think the shift in focus will soften AIDS Wolf’s confrontational spirit, think again.

“Anyone who thought we were just formless noise before will probably think we’re still formless noise now,” Lum says. “Our music will never be easy listening.”