Is Metric promoting their music, or relief for Haiti with new merchandise? 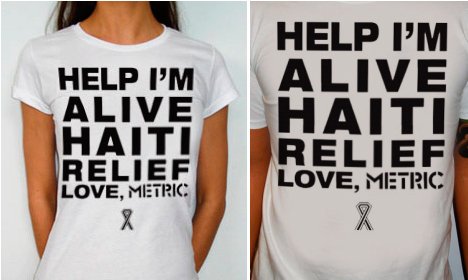 Metric sure have a knack for inadvertently (we hope) pushing people’s buttons.

In recent memory, they were widely mocked for their bitter-sounding tweet about losing the 2009 Polaris Music Prize to Toronto hardcore heroes Fucked Up. Not long before that, their manager wrote an ill-advised epic rant in response to Unfamiliar Records’ Greg Ipp’s similarly epic rant against them.

UPDATE: This note was sent to Metric’s fan mailing list, though not to media, on Tuesday: “Over the past few days, we have come to realize that some people found the wording of our Help Haiti t-shirt design to be questionable. Despite our good intentions, we can see how the messaging could be interpreted in a way different than we intended, and we apologize to anyone who took offense.” The design has been replaced.

Now, they’ve stirred up a bit of a hornet’s nest with their attempt to raise money for the victims of the Haiti earthquake. If you’re confused about the wording, Help, I’m Alive is a Metric song, which they must have thought would be a clever tie-in with the tragedy. Good deed gone wrong? Or self-promotion of the most offensive kind?

We’re pretty much on the fence about this one ourselves, so what do NOW readers think about it?