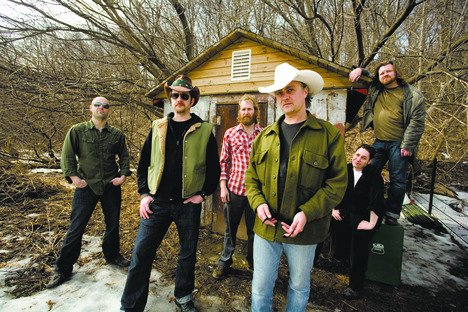 We’re only a minute in, and Clem C. Clemens, lead singer and chief rabble-rouser for White Cowbell Oklahoma, is already goading me.

“It’s taken NOW 10 years to build up the courage to speak to us,” says a whisky-voiced Clemens over the phone. “You were afraid of the truth. I’m glad you’re finally looking beyond your fear and embracing us.”

Admittedly, I was hesitant about featuring a band best known for songs like Put The South In Your Mouth and She’s Got My Love In Her Hand. Their live shows feature strippers, chainsaws, baby Jesus catapults and lots of fire, penis-flashing and Jägermeister. You can buy a White Cowbell Oklahoma cock rag at the merch table. (“It’s patented, absorbent, uses NASA technology,” Clemens quips. “Sexual cleanup has never been so easy.”)

On their third album, Bombardero (Slick Monkey), they’ve toned down their outrageousness in favour of damn good psych-prog that borrows from hazy 70s bands like Hawkwind and Black Sabbath and keeps their musicianship and songwriting chops front and centre. Don’t expect Clemens to admit to maturity, though.

“We’ve always had weird, psychedelic stuff and musical excellence and guitarmony-laden mastery on our albums if you looked between the cracks,” he says. “Our trilogy of albums is like a Bosch painting. This is the third panel, where everything goes haywire and giant budgies start biting the heads off of naked people with hammers up their asses in the pit of Hades.

“Also, we heard that Mellotrons get women really, really hot, so we put a lot of Mellotrons on there.”

The shift to making nuanced, dynamic music hasn’t stopped the band, which recently downsized from nine members to six, from revelling in obnoxiousness. Their legendary annual December show at Lee’s will be as over-the-top as ever.

“We have sound-wave technology blasting through the earth’s core right now just to modify the weather and make Toronto agitated until the show,” Clemens says, an endearingly naughty tone lacing his words. (He’s won me over by now.) “All this slush and snow? We’re trying to get you agitated. Then there will be some explosive relief happening on Friday.

“I can’t tell you who the guests will be” – past ones have included Chris Murphy, Feist, Seán Cullen, Ian Blurton, Sam Roberts and Tyler Stewart – “but I will tell you that people will probably wake up [the morning after] feeling somewhat ashamed, somewhat saved, and confused as to why they are in, ah, Petawawa lying next to a sasquatch.”

Lead singer Clem C Clemens on why you should go to a White Cowbell Oklahoma show:

On how the album was influenced by playing to European audiences:

On why three members recently left:

On how to stay inspired after a decade together: