More than 100 musicians declare a climate emergency in Canada 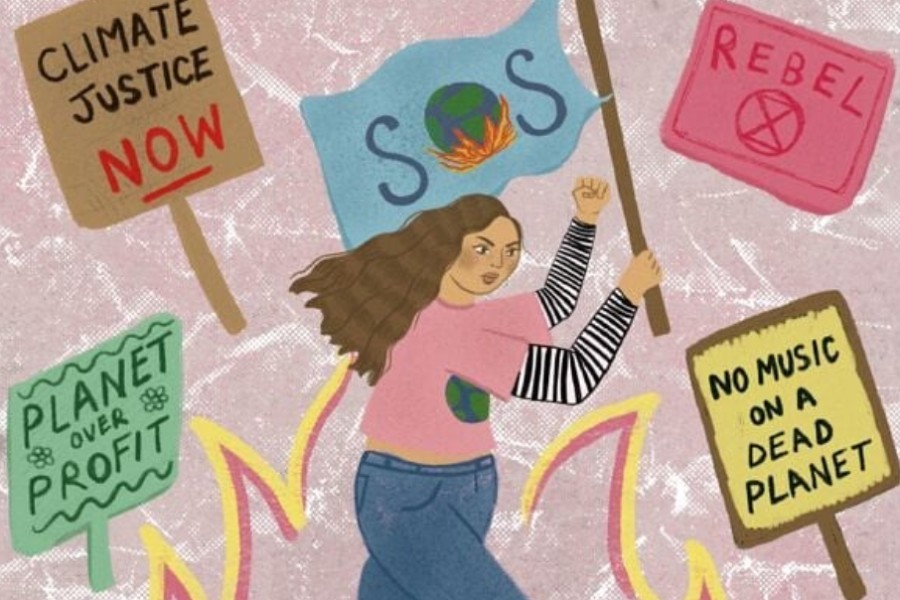 Canadian musicians are declaring a state of emergency.

This one is not specifically related to COVID, but an issue that remains an existential threat during the pandemic: the climate crisis.

Music Declares Emergency (MDE) launched this week in Canada, and a big list of artists have signed on in support: Tegan & Sara, the Weather Station, Dan Mangan, Caribou, members of Broken Social Scene, Luna Li, Tokyo Police Club, LAL and many more. Internationally, declarers include Radiohead, Billie Eilish, the xx, among others.

By signing on, each artist declares the following:

And as a music community:

What is Music Declares Emergency?

MDE launched in the UK in 2019 and is becoming a global movement with a shared slogan: No Music On A Dead Planet. There are chapters in  Switzerland, Germany, Chile and France, with more to come.

MDE Canada was the latest to launch, coming together at a Zoom meeting on March 18.

“Right now, there are a lot of discussions about rebuilding the music industry and building it back better after COVID,” says Brighid Fry, one-half of the Toronto folk-rock duo Moscow Apartment in an interview with NOW. “And so, great, let’s find a way to make climate a part of that. If we’re going to breathe all this new life into the music industry, let’s make it as sustainable as possible.”

Fry is taking the lead on Climate Live in Canada, which is one of the environmental organizations and initiatives under the umbrella of MDE. Climate Live is a series of concerts that will take place on April 24 and October 16 around the world, leading up to the UN COP26 conference in November, when governments will renew their Paris Agreement pledges (which Canada is lagging on in a big way).

The movement arose out of the youth-led, Greta Thunberg-inspired climate strikes of 2019 and the Wet’suwet’en Strong solidarity movement. Fry, who recently turned 18, says she’s excited about some names who’ve shown support to potentially play at the virtual concert on April 24 and a hopefully in-person follow-up in October.

Fry was one of the main panellists at Thursday’s MDE Canada launch event. Others included Fay Milton, the drummer of the band Savages and the co-founder of MDE UK (the original chapter); Liv Cazzola of the bands Tragedy Ann and The Lifers; Catherine Abreu of Climate Action Network Canada; and Caroline Brooks of the Good Lovelies and a working group member of MDE.

Brooks laid out the four arms of MDE Canada.

There’s political work, which includes leveraging artists to use their platforms and influence their fans to take action.

There’s a goal to change the music industry. “Artists take on a lot and it’s time for the industry to step forward,” she said. In the UK, all the major labels have signed on, but none of the majors have yet in Canada. Many independent organizations and labels have, however.

The third arm is to create art that addresses the climate emergency, using musicians’ creative toolbox to influence change.

There’s also a stated solidarity with communities experiencing environmental racism, recognizing that Black, Indigenous and people of colour are bearing the brunt of the climate emergency. Diversity of MDE’s working groups is something they hope to address immediately, she said, as well as creating concrete policies on inclusion of BIPOC.

What will Music Declares Emergency do in Canada?

MDE is a large umbrella with lots of initiatives underneath it, and aims to build bridges between musicians and existing climate initiatives. (Climate Action Network itself has 130 groups under its umbrella.)

Between them, they’ve been thinking of concrete actions that musicians and the music industry can take to make their own practices more sustainable. Some ideas include climate clauses in record deals, green riders at venues (like no takeout containers or bottled water in green rooms, carbon offsets, etc), closed-loop merch manufacturing, sustainable vinyl production, carbon offsets, large-scale carpools to big stadium concerts and funding opportunities for greening projects. They also intend to put pressure on the industry to make sustainability a default part of their operations.

There are a lot of incremental changes to be made. But there’s also a caution not to get too focused on personal responsibility, which can often mask and shift focus from the major impact of policy change and corporate responsibility.

Abreu stressed the importance of putting pressure on government, with goals of getting Canada to pass its first piece of climate accountability legislation, hit the goals it’s constantly espousing and “be brave enough to have a real conversation about oil and gas in this country.”

For that, musicians have a powerful tool: their platforms.

Music shapes people’s identities, she said, and hearing from their favourite artists can make a major difference in influencing real change.

The MDE launch was the beginning, but there’s major urgency to get working.