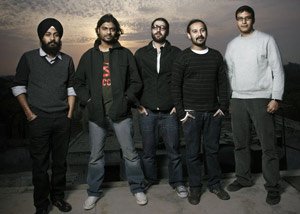 The fact that Percee P’s been in the game since the mid-80s but is only dropping his debut album now speaks volumes.

Chapters 1 and 2? The Industry Is Hell, and Percee Is One Determined MC. It’s why his strong Madlib-produced LP’s title, Perseverence, is so appropriate. This is the Bronx lyricist who made his name battling Lord Finesse in 1989, then stayed on the radar in the 90s hustling his own tapes outside NYC’s Fat Beats.

One of his earliest supporters was Canadian hiphop icon Maestro Fresh Wes. The two recorded Pray To Da East for Maestro’s 1994 album Naaah, Dis Kid Can’t Be From Canada?!! In the intro to the song, ‘Stro calls Percee “one of the illest MCs in the world.”

P spoke from his New York home about first connecting with Maestro in 1990.

“I was chillin’ there, can you imagine that? I didn’t win,” he says. “I don’t remember who beat me, I know Treach [of Naughty by Nature] was in the competition, but I went a cappella so I lost in the first round. I was with Lord Finesse, Ultramagnetic MCs, Ice-T was in the audience. So when I lost that battle, I still felt like I had a lot to prove.”

When The Source named P’s verse on Yes You May with Lord Finesse and A.G. its Hiphop Quotable – “May 1992 issue of The Source, page 17,” he says without missing a beat – Maestro was one of the first to congratulate him.

“Maestro was proud because he’d told so many people about me. ‘Percee P’s ill,’ you know.”

“Yeah, yeah, yeah. That’s my man,” says Maestro from Vancouver, where the rapper-slash-actor just wrapped filming Instant Star on CTV and a series for TMN called The Weight.

“I heard him and just decided he was the real deal. Then we worked together in 1993. We just reconnected for Pray To Da East. That was when I’d moved to Brooklyn. Percee’s just one of those MCs, especially in terms of the lyrics. I’m just glad he checked for me, especially coming out of Canada. Lord willing, we’re gonna work together again.”

Just cuz Percee’s first album is now out on Stones Throw/Koch doesn’t mean he’s stopped being own his best distributor. He’ll do whatever it takes to get his music heard. We asked P to break down his pre-show prep.

“During the day, I’m checking my MySpace, Facebook and e-mail, and burning CDs. Then I go to Kinko’s and make some covers. I try not to talk too much, but sometimes I have no choice because I go to the club early when people are standing in line. That’s when I try to sell ’em CDs.

“If I come with 50 CDs early, it’s easier to get rid of them, rather than when you’re in the club, and I can get everybody that way. A bit later, I’ll stand outside for the latecomers.

“At the end of the show I say, ‘I appreciate everyone who supported me,’ and if I got more I say, ‘I got 200 more CDs. You can still grab CDs before I leave.’ And boom, as soon as I get off the stage I sell a few more. If I have to wait till the end of the night to sell ’em all, I’ll do that. All I want is for my music to be heard.”

If you’re going to the Stones Throw show to see Guilty Simpson, you might want to hold up – the devastating Detroit emcee won’t be appearing on the bill as advertised. Reached at his D-town crib, Simpson says that a regrettable run in at the Windsor border more than 10 years ago is preventing him from making the gig.

“Me and my crew were involved in some drama in a Windsor bar,” recalls Simpson. “I was young and stupid, but I paid my debt to society years ago and haven’t had any legal trouble since. Yet when I tried to cross the border recently, I was refused entry. I’m going to get my lawyer on the case to sort things out. I just wanna be able to do my thing when my Ode To The Ghetto album drops in February.”

On his songs about perseverance

On the days before record labels were important

On his first record, Let the Homicides Begin (with D-Nique as TopPriority), being played on commercial radio in 1988

On what selling CDs and tapes on the street was about