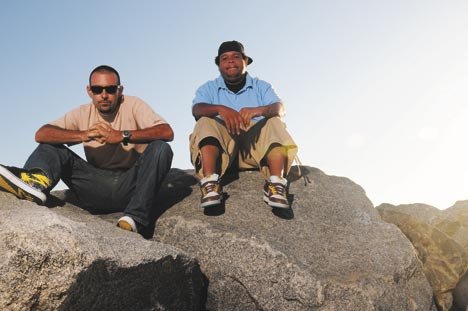 People Under the Stairs have taken a step back.

Since hip-hop groups are always bragging about their evolution, it’s refreshing to hear producer/rapper Thes One say that the duo’s latest, Carried Away (Om), is by no means an effort to elevate their craft.

“The album before this one, FUN DMC, was pretty ambitious, and kind of an exhausting record to make,” he explains over the phone from his place in L.A.

“For this one, we just wanted to capture the moment, as opposed to working and thinking, which music probably shouldn’t be doing.”

The pressure definitely seems off on their seventh effort, with Thes’s and Double K’s breezy lyrics coasting over minimal production reminiscent of early Beatnuts. Keep an ear out for a stray sample from The Price Is Right theme song.

Incidentally, Thes One was a guest on the long-running game show. (He’s actually doing this interview on the couch he won.)

“When you’re up there, everything’s big light bulbs and door handles and plywood and paint,” he says.

And though he didn’t come away empty-handed, he was too vigorous to make it to the Showcase Showdown.

“I spun that fucking wheel too hard and ended up getting, like, five cents.”

The group’s Feburay 20th show at the Opera House was delayed from its original January 30 date. This is why.

Thes One is also an avid record collector. Here, he names the best crate-digging city in the world.

On that note, Thes explains the concept for People Under The Stairs’s phenomenal video for Trippin’ At The Disco.