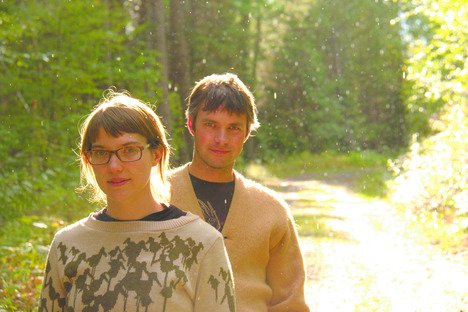 If one thing becomes clear while chatting with Language-Arts’ Kristen Cudmore, it’s that the pint-sized singer/guitarist is pretty fearless.

“People either love it or hate it,” Cudmore says with a laugh over the phone from Vancouver. “People’s beef with our band is usually my voice. They might love the music but can’t take my style of singing. That doesn’t affect me at all – it is what it is. I’m given one voice, and I’m going to work with it.”

Cudmore first picked up the classical guitar as a 12-year-old after hearing her uncle play it badly during a family vacation. (“He was in his Jesus stage, with the hair and beard, and when he was singing these songs, I was like, ‘I want to get better than him, because he’s not very good.'”) From there, she began practising hours each day.

Five years ago, she relocated from her hometown of Wolfville, Nova Scotia, to Vancouver in fluky circumstances. After being accepted at music grad school in Hawaii, her plans were foiled when the school failed to file her visa paperwork.

“I’d already bought this plane ticket that connected in Vancouver,” she explains, “so I just decided to go there anyway, without planning it at all. I had a bag of stuff and my guitar. Good things and not good things happened, but it’s kept me here.”

One of those good things included meeting Phillips, who, remarkably, is also from small-town Wolfville, though the pair met for the first time out west. While she brings her love of classical guitar and underground hip-hop to the two-piece, he draws from his experiences at jazz school and scoring films. To recreate the layers heard on record, they hire a keyboardist and bassist for live shows.

There was a time, though, when Cudmore was actually quite fearful, and that posed a threat to her music plans.

“I always felt like I was going to poop my pants before I played. But I realized I had to get used to playing in front of people if I was going to do this. At the time – this was in high school – I was volunteering at nursing homes, so I’d go in and play classical guitar for whoever was trying to go to sleep.

“Some of them were actually in a vegetative state, so they were the easiest. I was like, ‘They’re not judging me.’ It helped me get over my stage fright.”