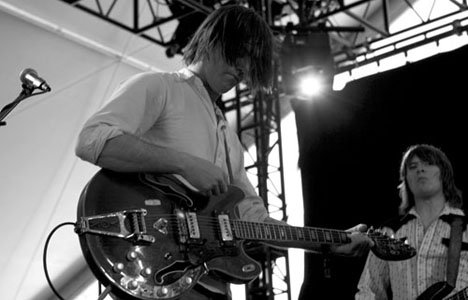 Frisco experimentalists The Brian Jonestown Massacre posted their album, Who Killed Sgt. Pepper? set for release first thing in January in it’s entirety on their website this week.

The post went up at the beginning of the week and has actually been trickling into the web little by little since April, and the likelihood of it of it sticking around is slim considering the frontman Anton Newcombe ominous accompanying message:

The release will be the 10th studio album from the west coast revolving door lineup of musicians.

BJM started out in the early 90s with a penchant for psychedelics and cultish behaviour and were featured in the award-winning doc, DIG! Though their post-rock, electronic sound has shown marked evolution in the past ten years it seems they haven’t strayed far from their inspirational well.

And WKSP? eases you into it. An Eastern nod fused with the standard electric backbone Jonestown’s come to rely on is bloody lucid and noticeably distances them from the Warhols on this one.

It’s characterstically experimental, still pointed and sardonic but the 13-song pre-release also delves a darker hole in the hallucinogen infused psyche of Newcombe and company this time around.

Let’s go Fucking Mental’s the first sign that the supporting tour for this one is going to be unmissable.

Even the lightest tracks pleasantly disturb. Like White Music, which follows Mental and is set to a video that odes to either Alice in Wonderland or the Exorcist.

There’s a middle section of the album that does drag a bit relative to depth of the rest but there isn’t a single track that’s not without its warped charm.[rssbreak]