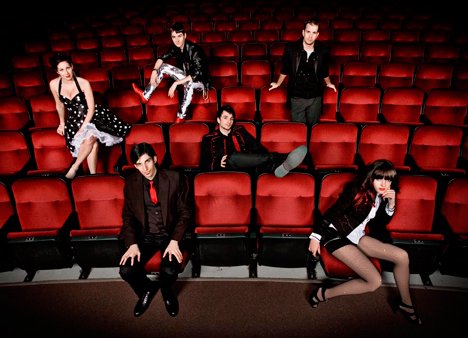 To say that Stagehands have a flair for the dramatic would be an understatement.[rssbreak]

A love for Broadway musicals is at the heart of the six-piece band, which borrows influences from Joseph And The Amazing Technicolor Dreamcoat and Green Day’s rock operas alike.

The group is the brainchild of bassist/vocalist David Yenovkian. “We wanted to make a multi-genre thing that stands on its own, like a musical,” he says, “but is also like a rock band just playing its own songs.”

After spending the past couple of years building a reputation for uniquely theatrical performances, Stagehands will release their debut, The Silent City (independent) tonight at Lee’s Palace. Expect the album – and, since they’re performing it in its entirety, the show – to have a strong narrative thrust.

The record centres around a songwriter who gets lured in by an ad for an alternate-universe Hollywood called the Land of Entertainment. But, as one can imagine, this seeming utopia of glamour and glitz has a dark side.

“There’s an evil mayor played by David,” explains lead vocalist Geoff Stevens. “Basically the guidelines in the city are that if you want to become famous, you have to put on this mask, the same mask everyone wears.”

There’s no shortage of dramatic irony to Stagehands, whose shows are somewhat labour-intensive, what with their props and evolving set-pieces.

“The funny thing is, in the end we actually have to act like stagehands for our band.”

How Stagehands came together:

Being influenced by rock bands and musicals while avoiding being derivative of them:

The eventual goals of the band:

Info about their free download and album release party

Carla Gillis’ March 30 review of Stagehands’ show at the Horseshow