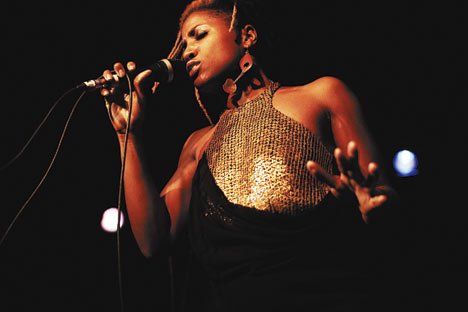 There’s a high probability that you’ve already heard Saidah Baba Talibah sing and didn’t know it. The Toronto soul singer (and daughter of Canadian jazz and blues icon Salome Bey) has belted backing vocals for everyone from Maestro Fresh Wes to country singer Johnny Reid, and even put in three seasons with the Canadian Idol band. Her impressive resumé makes it all the more surprising that it’s only recently that she’s begun to focus on her own solo material.

“I’m a perfectionist, and I had to get over the voices in my head telling me I wasn’t good enough. Standing on the same stages and being in the same career as my mother and uncle (pianist Andy Bey) and being compared to them was intimidating.”

She did manage to partially let go of that perfectionism last fall when she released The Phone Demos. As the title suggests, it’s a collection of recordings made on her cellphone, documenting songwriting sessions with her guitarist, Donna Grantis. The no-fidelity tracks sound like 1920s field recordings made using decidedly 21st-century techniques, and are way more listenable than they have any right to be.

“They are beautifully imperfect, and I was ready to embrace the flaws as a kind of perfection. Along with being a perfectionist, I’ll also try anything once. Sometimes I’ll just jump and see what happens. If I hit my head, then I’m not going to do that shit again.”

She’s hasn’t forgotten about traditional recording, though, and is close to finishing her proper debut in more conventional studio settings. That said, her band definitely doesn’t have your typical lineup. As you’ll hear when she plays Harbourfront’s Kuumba Festival on Saturday (February 6), she’s replaced the usual bass guitar with tuba, and takes risks like arranging blues tunes around a cello. She’s also taking an unorthodox approach to funding the album, letting fans invest in it through pre-purchasing. For a larger investment, she’ll even prepare you a raw vegan meal, perform a private dinner concert and bring along a burlesque dancer.

“Nobody has taken me up on that yet, but I did get someone who wants me to record their favourite song, which will be interesting. I still haven’t found out what the song is.”