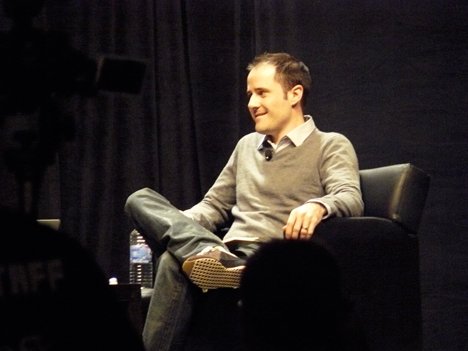 Evan Williams, the Twitter co-founder, used his SXSW keynote to introduce @anywhere, a new service that highlights Twitter users within news stories and allows users to Tweet a story without leaving the website they’re on.

The new @anywhere service made the otherwise drab keynote worthwhile. Williams was faced with questions to the equivalent of “how did you make Twitter so great?”, which was mostly received by groans from the in-the-know audience.

Williams talked about his efforts to “increase the signal-to-noise ratio,” thus getting the 100 or so important tweets per day (out of 50 million, the noise) to users.

He also spoke briefly of the site’s growth from startup to social media giant. To demonstrate, an organizer flashed a Twitter shirt Williams brought to SXSWi four years ago, with no Twitter bird or cutsie font, just type that said: “wearing my Twitter shirt.”

Now, four years later, attendees are showing up dressed as the iconic Twitter bird, and promptly being escorted out. Whatever lessons can be gleaned from Williams’ speech, the obvious one is four years is an eternity online.