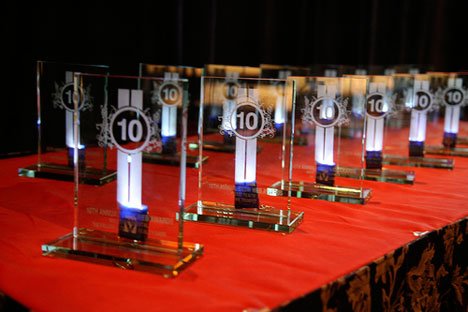 Toronto was well represented as the SXSW Web Awards. Most notably, Waterlife, a site for the NFB documentary of the same name, took home best Activism site.[briefbreak]

The Waterlife site is an impressive set of flying photographs each representing a surprising/alarming statistic on the Great Lakes.

Other local nominees were Livebrush in the Art category, Swarm for Nawlz and Xenophile for TVO’s Empire of the Word. Unfortunately neither won.

The major tech news out of the award is the triumph of Gowalla over Foursquare in the Mobile category. The two warring location-sharing services are the talk of Austin this year, with allegiances split down the middle, though Foursquare has many more users in the general, non-dweeb public.

Speaking of dweebyness, Wolphram Alpha, the horribly named but incredibly smart search engine, which answers queries instead of directed you to site that answer them, got the coveted Best in Show award.

Cornify, which spices up webpages with unicorns, demonstrated the will of the dweebs winning the People’s Choice award.

Here’s a full list of the winners in alphabetical order.

Motion Graphics: We Choose the Moon