Post-rock pioneers push beyond the formulas they invented 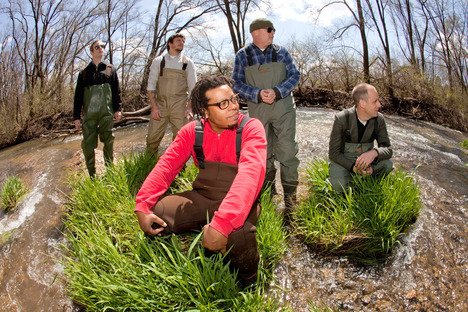 His reserve threw Broken Social Scene’s Kevin Drew for a loop when the Toronto band recorded their upcoming album with him. As Drew told me recently, at times he couldn’t figure out if McEntire hated or loved the vocal tracks he’d laid down. It not only turned out to be the latter, but McEntire had so much fun, he’s joining BSS as an unofficial member for a few upcoming tour dates.

“Well, that’s the plan,” McEntire says. “It’s going to be a little bit contingent on schedules.”

While the sprawling, shape-shifting band that is BSS seems to grow day by day, Tortoise are taking a different approach. The Chicago quintet is making touring simpler this time around, in part by having adjusted their songwriting and recording process.

“Unfortunately, we usually approach touring by becoming a cover band of ourselves,” McEntire explains. “Typically, there are a lot of things on the albums that are difficult or impossible to perform live, so we have to reimagine them in some way.

“We’ve gotten away from painting ourselves into that corner with the new album [Beacons Of Ancestorship, out on Thrill Jockey]. We actually had songs written before going into the studio, which is not always the case for us. So now we don’t have to spend a month learning how to play the set before going on tour.”

When Tortoise began in 1990, the idea was to escape the formulas and influences with which the band had grown up. Borrowing as much from jazz as from electronic music and rock, they sounded like no one else and inspired legions of imitators. But after two decades, they were struggling not to repeat themselves.

“With our last two or three records, it’s been a case of, ‘We’ve already done that – we can’t go there again,’?” McEntire says. “We had to get a new sound happening. Not entirely new, but new enough that we didn’t feel we were getting boxed in.”

John McEntire discusses being mistakenly labelled the leader of Tortoise: