Abramson Singers strip it down and hit the rails 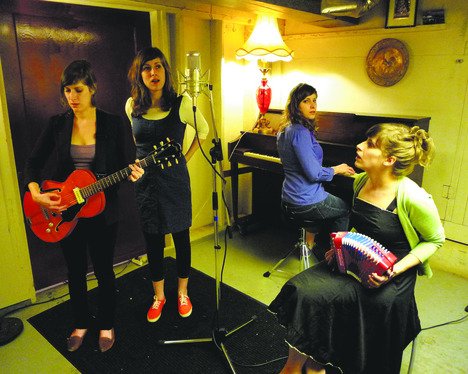 The many sides of the Abramson Singers Leah Abramson.

Any musician will tell you that Canada is a tough country to tour, especially in winter. There are the huge driving distances, even between small cities, and our extreme weather. It’s no wonder live clubs are so quiet this time of year.

Vancouver indie folk band the Abramson Singers (aka Leah Abramson and friends) are tackling that problem in a novel way.

“We’re going to take the train,” says Abramson, “which is kind of cool. They’ve got this program where you can basically play for your ride.

“We’re going from Vancouver to Halifax in the dead of winter, so this seemed like a way to actually see something along the way. I’m deathly afraid of driving across the country in this weather, but I imagine it’s quite beautiful to see.”

Since they’ll be serenading their fellow travellers in addition to playing shows from here to Halifax, Abramson’s pared down the lineup – which has, at times, reached a dozen – to a more manageable acoustic duo.

Then again, the Abramson Singers’ debut self-titled album (White Whale) is pretty impossible to duplicate live, even under normal circumstances.

A temporary bout of tendonitis that prevented Abramson from playing guitar inspired the project. Instead of taking a break from music, she began recording a cappella, layering her voice into lush choral arrangements. Once her hand recovered, she fleshed out the songs with her band but kept the dense harmonies in focus.

But taking an eight-piece choir on the road isn’t easy, even in warm weather, and her songs don’t lend themselves well to looping effects.

“It can seem a bit gimmicky when you see people playing live with looping pedals,” she says. “You don’t get into the song as much as you get into the fact that someone’s doing something cool with technology.

“If I’m going to reproduce this stuff live, I’d rather do it with real singers.”