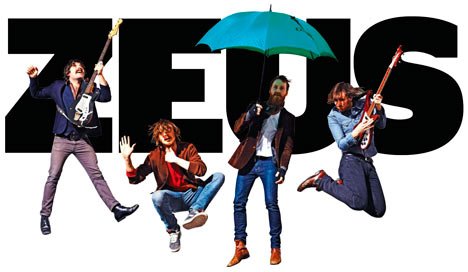 Zeus are diehard musicians. They’d find a way to keep playing even if you chopped off their hands. They’re young, but they’re definitely lifers, and that’s exactly who you want in your band.

That single-minded passion for, and obsession with, playing as much as possible with as many projects as they can caught the attention of Broken Social Scene alumnus Jason Collett, who’s since adopted them as his backing band. Collett is on record saying the collaboration has produced the best work of his career. It’s even been described as the contemporary equivalent of Bob Dylan and the Band.

But as good as the combo has been for Collett, there’s a very real chance that it’s Zeus who’ll be getting the attention on their upcoming Bonfire Ball tour (kicking off Wednesday at Lee’s Palace as part of Canadian Music Fest). Conceptualized as an old-fashioned revue, the show features Zeus as the house band of the evening, supporting both Collett and Bahamas as well as showcasing their own material.

That means they’ll be onstage pretty much the whole evening.

“I’m mainly worried about going that long without smoking,” cracks Neil Quin as the band takes a short breather between rehearsing for the tour and setting up for a gig later that night.

The house band situation presents the kind of physical challenge that intimidates most musicians, but chances are Zeus would be jamming backstage even if they weren’t everybody’s backup band that evening.

Even Zeus’s origins come down to childhood chums Nicholson and Mike O’Brien killing time by making more music while their primary projects had some down time.

“Mike was playing in Paso Mino (Collett’s previous band), and I was with the 6ixty8ights, who weren’t doing much at that moment,” recalls Nicholson. “One of the members of Paso Mino took off and joined another band, and it left all this time, so Mike and I rekindled our musical relationship.”

“There’s some serious juggling going on with us, but why not make music with your friends when you can?” continues O’Brien.

Initially, Zeus was just a loose recording project for the two of them and whoever happened to be coming through their busy recording studio that day. Eventually, they realized the songs were strong enough to be played live, so they drafted Quin (who brought a bunch of his own songs to the table) and drummer Rob Drake.

The resulting album, Say Us (Arts & Crafts), brings to mind a different classic rock institution than the oft-cited Dylan/Band comparison. The lush three-part harmonies, tightly constructed arrangements and rock-solid hooks sound more like the Beatles than anything else.

But while it’s obvious the band has seriously studied the Fab Four, it’s tough to bait them into admitting that they’ve got some major retro tendencies.

“We’re not trying to be the Beatles or anything like that. We’re just making the songs and arrangements that sound best to us,” Nicholson protests.

“There are a lot of albums that would have sounded ‘throwback’ if the artists had managed to record them the way they wanted to.

“The other day, an interviewer was talking about how you can feel bad about not listening to that cool new wave band you’re never in the mood for, but you always feel like listening to Zeus. It’s just rock and roll, done our way.”

He does have a point. No matter how hip the indie band, if they’re travelling kilometres in a tour van, classic rock generally ends up winning the battle for the stereo. If this is the music you enjoy listening to, why not make it? Especially when you’re good enough to pull it off.

“There’s pressure to change your style every few years based on whatever is happening at the time, and certain brands of rock and roll were never fully explored as a result,” muses Quin.

“It’s an area of music that’s been ignored for a while, and I’m not really sure why,” continues Nicholson.

“All songwriters have accumulated some representation of every music they’ve heard and liked. We’re just trying to make Zeus sound like what we think sounds the best.”

So they don’t want to sound like The White Album they just want to reference it. That might not produce the most original and unique-sounding record, but it does make for an honest-sounding one.

Besides, this is the kind of album you unconsciously find yourself playing on repeat. Isn’t that what we want from a pop record?