A harsh history of Canada in Haiti 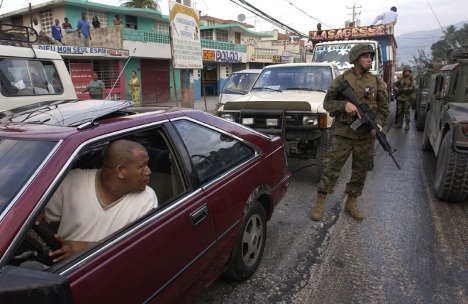 US troops patroling the Haitian street in 2004

For all the outpouring of generosity, we’ve been patting ourselves on the back for all our good works in Haiti, it’s hard to lose sight of one overarching fact: that it took an act of god to turn the world’s attention to the troubled island nation.

Before a 7.3 magnitude quake shook the capital to near total destruction, Haiti was the forgotten hellhole of the Americas, the poorest country in the Western hemisphere, plagued by unrest and violence – with little old Canada playing a major role in creating the UN-backed political and economic disaster.

What story will be writ once those of women and babies being pulled from the rubble are no longer front page news?

Most Canadians are just now catching wind of what the evil Canadian foreign policy has wrought in the region. We’ve got blood on our hands, so forgive me if it’s a little hard for some of us to get excited about all the telethons and such to raise money for relief efforts. Canada for Haiti? Curious.

Is it our collective sense of guilt pushing us to donate?

A slave uprising freed Haiti from the grip of French colonialism more than 200 years ago.

Some would say the country has continued to be enslaved, only by successive U.S. and Canadian involvement.

A few harsh truths about Canada’s history in Haiti.

• Behind the peacekeeping and building democracy efforts, Canada’s involvement in Haiti has also contributed to the instability there. Some critics have lamented Canada’s “colonialist” role, which goes back to the mid-1980s, in Haiti’s turbulent transition to democracy.

They point to the fact Canadian development aid was used to fund organizations hostile to the democratically-elected government of former Haiti president Jean Bertrand Aristide – whom, by the way, was removed by the U.S. with the help of Canadian forces, 550 of them to be exact, stationed at the Port-au-Prince airport to guide Aristide’s passage out of the country back in 2004. Canada maintains Aristide left voluntarily.

But the Caribbean Community (CARICOM) and the African Union (AU), among others, have called for an investigation into the circumstances of Aristide’s departure. And the Canada-Haiti Action Network (CHAN has called for the withdrawal of the Canadian government’s involvement in Haiti.

• RCMP-trained Haitian National Police, staffed by some 500 former military officers, have been linked the deaths of unarmed government protestors and hundreds of civilians in the capital’s poorest neighbourhoods.

• We ship more foreign aid to Haiti, than any other country in the world except Afghanistan. Haiti figures prominently in Canada’s foreign policy blueprint, Canada’s International Policy Statement: A Role of Pride and Influence in the World.

We’re supposed to be advancing the cause of economic and political stability in Haiti but corruption and human rights abuses is rampant. Suspected dissidents ?ll prisons, and the voices for change are silenced. Haiti’s ruling classes reportedly pay gangs to kill anti-government supporters. Haiti ranks as one of the most corrupt nations on the planet, 168 out of 180 countries on Transparency International’s Corruption Perceptions Index for 2009.

Then there’s the continued plight of women and girls. UNICEF estimates that there are as many as 100,000 Haitian girls working as domestics in the country in conditions that amount to slave labour.

• After Aristide’s departure, foreign multinationals, among them Canadian mining companies, rushed to exploit the country’s resources. Thanks to what has been hailed as “an improving business climate,” Canadian mining companies have laid claim to thousands of kilometers of heavily forested lands in the north of the island in a bid to exploit deposits of gold, copper and silver. Some exploration and mining efforts have, according to opposition activists, triggered mudslides and left cyanide filled craters in the countryside.

• Canada has participated in UN peacekeeping missions and as observers of Haiti elections. But some critics liken Canada’s intervention in Haiti to the U.S.’s in Iraq. Overstatement? Here’s what a Miami University School of Law investigation of 2004 had to say about the security situation in Port-au-Prince, post Aristide:

“As they die from bullets, starvation, and disease, the poor cry out for a chance to be heard. Despite the ubiquity, and the planning of the United States, Canada, the UN and others, no one in control can claim to have made any investment in real dialogue.

The investments that have been made are in ?repower, and the dividends have not satis?ed the Haitian people’s social, economic or political needs. Instead, the observable returns on the investment are bodies left in the street to be eaten by pigs or rotting in the morgue, and the tearing apart of communities that have long been knitted together by their shared hunger.”

A Canadian commander of the UN Civilian Police Unit, is quoted as saying in the same report that the UN mandate in the country is to “coach, train, and provide information,” but that all he has done in Haiti is “engage in daily guerrilla warfare.”

The writers of the document report the sound of semi-automatic gun?re while interviewing the commander, who reportedly asks “where are the newspaper reporters?”[rssbreak]