Why is the Toronto press putting bad spin on the good budget news? 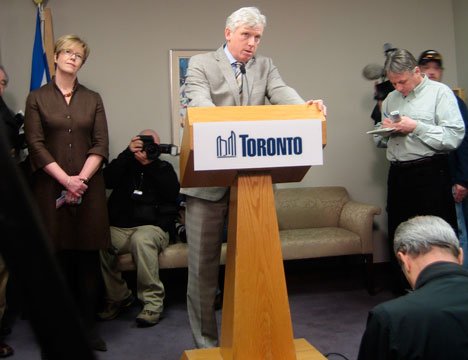 Somewhere, Mayor David Miller must be shaking his head, maybe snickering a little to himself at the reaction to his big budget announcement last Wednesday.

Turns out there’s $100 million additional surplus in the city’s kitty that’ll mean lower property taxes than projected, 2.9 from 4 per cent, fewer cuts in services and no TTC fare hike next year (if the province does as expected and comes through with some cash).

Of course, the usual suspects among the city hall press corpse, er corp, jumped all over that one. More money dropping out of the sky? What gives? The surplus was $250 million just a few weeks ago. The answer: budgets are based on conservative estimates that are constantly revised. It’s worth noting too that the $100 million figure represents a little more than 1 per cent of the city’s total $9.2 billion operating budget, a small variance, all of which was pointed out at the press conference.

Still, A Miller headscratcher, offered the Star in yet another frontpage slam (yawn) by Royson James, who can’t seem to get over the Mel Lastman years. “A lame duck squawks one last time,” was the headline in the Globe.

Pure politics, lamented the men and women of the press.[rssbreak]