NOW MagazineNewsMan, this was a satisfying smackdown of Giorgio Mammoliti

Man, this was a satisfying smackdown of Giorgio Mammoliti

and delivered by Mayor Tory, of all people 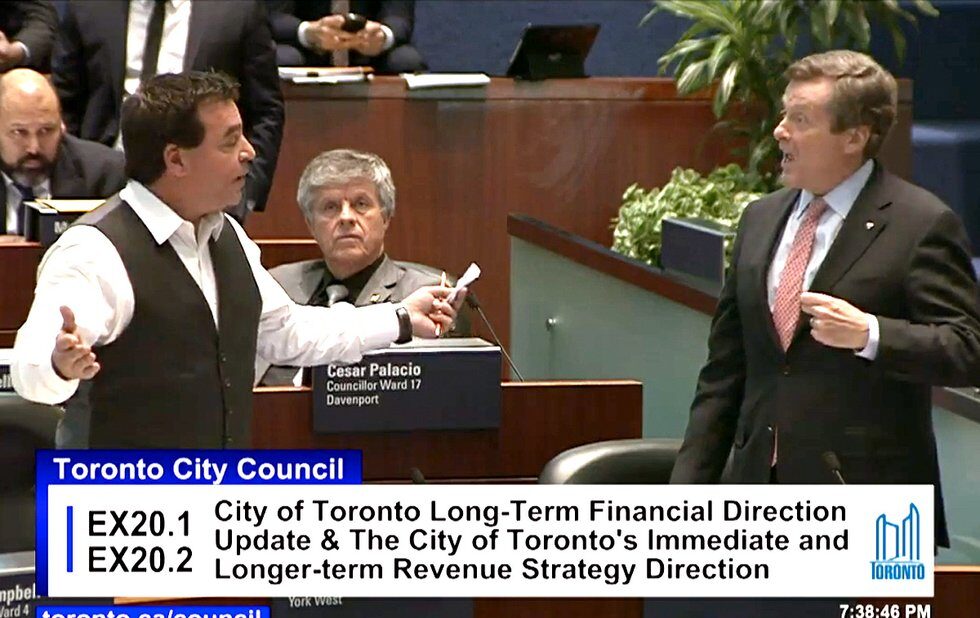 At 9:30 pm Tuesday, when Mayor John Tory held a media availability to boast of his success getting city council to support road tolls (well, a request to the province to allow tolls), his voice was uncharacteristically hoarse. Given that he had spoken no more than usual during the day’s meeting, this was presumably attributable to the full-throated smackdown he had delivered councillor Giorgio Mammoliti two hours earlier.

Mammoliti, of course, is the clown prince of city council, the quintessential municipal blowhard forever in search of a headline-grabbing cause. Where even Rob Ford, for example, had a loose guiding ethos, Mammoliti instead flings his blustery passion behind whatever supposed conviction suits him politically at a given moment.

The past couple weeks, it’s been a (largely one-man) fight against tolls, with the councillor even going so far as to display a “HONK for NO TORY TOLLS” banner over the Gardiner in a reasonably effective publicity stunt. So it was not at all surprising that Tuesday’s day-long council debate — concerning the city’s long-term financial direction and revenue strategy, of which the proposed tolls are but one part — came to be dominated by the Ward 7 (York West) councillor’s unhinged theatrics. He used every opportunity available to him to rave about the matter and issue dire warnings of the electoral consequences for those who would support tolls, slinking only slightly beneath his usual depressing standard for discourse.

Remarkably, however, the debate climaxed with a stunning moment of catharsis, delivered by Mayor Tory, of all people. Through the dark magic known as a Staffer Using Google, he read passages from a Toronto Star report from the 2010 election in which Mammoliti — then running for mayor on a platform of explicit outrageousness — proposed tolling an expanded Lake Shore Boulevard to fund the conversion of the Gardiner into a series of elevated parks.

“And he says, and I quote, ‘None of them would mind paying $2 if it is going to something meaningful,'” Tory announced. “That’s what you said, or this has been the grossest misquotation in the history of Toronto politics, and I am prepared to join you in going up there [to the press seats] right now and saying, ‘I never said that! I’m going to sue you!'”

Now, digging up past statements proving Mammoliti a hypocrite is almost so easy as to be a cliché — the inevitable upshot of having parlayed a lack of principles into a long career in politics. But seldom has one been thrown back at him so effectively, the drama magnified by the physical proximity. (Tory unsuccessfully tried to change this at the start of the term.)

Chastized, Mammoliti later rose to apologize for how heated things got and to falsely claim that he had only been advocating for tolls on new, not existing, roads.

Goodness knows this was all a distraction from the larger issues at stake in the debate, and from the fact that tolls, though welcome, are at best a partial solution whose revenues will be significantly eaten up by needless, politically motivated mega-projects.

But given the general overbearing awfulness of the world, and the endless muck through which we wade on a daily basis, we think it important to celebrate and embrace those things in life that are really, truly good.