A woman among warlords 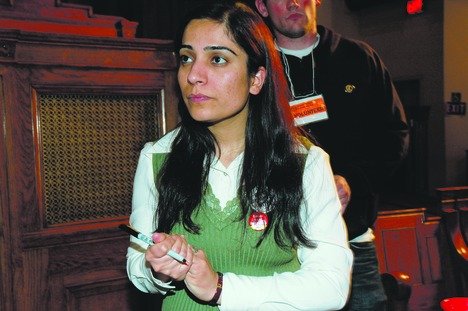 Former Canadian Forces Chief of Defence staff Rick Hillier wasn’t the only one in town this week flogging a book on the seemingly hopeless Afghan mission.

Malalai Joya, the woman expelled from the Afghan parliament in 2007 for denouncing the number of war criminals in Hamid Karzai’s government, was in town to pump her new autobiography, A Woman Among Warlords.

Joya’s accented English is hard to understand at times. But a largely young and receptive crowd easily picks up the message Wednesday, November 18, at Trinity St. Paul’s Church.

Everyone in this audience is familiar with the details of Joya’s story – the fearless 31-year-old woman who grew up in refugee camps, taught in underground schools for girls during the Taliban years, headed an NGO to improve the health and education of women, and got elected in 2005 to the Afghan parliament. Joya (a pseudonym she uses to protect her family) now travels with bodyguards and sleeps in safe houses while continuing to face assassination threats in her country.

“Because of telling the truth, because I exposed their crimes, because I never stayed silent, never compromised with them, and because I’m a woman, they kept me out of the parliament,” Joya tells her audience.

She’s against the idea being discussed in some NATO capitals of bringing elements of the Taliban into the Afghan government fold to dampen a worsening insurgency.

“Don’t be deceived by the so-called moderate Taliban,” she tells the assembled, her voice rising. “The U.S. wants to give legitimacy to their puppet regime [the Karzai government].”

As she says this, Olivia Chow, the local NDP MP, another of Joya’s presenters on this night, doesn’t bat an eye. Her party, among others in the peace movement, takes the position that talks with the Taliban are inevitable as part of a diplomatic scaling-down of a vicious war that’s drawing in all of the major actors in the region.

Joya is unassailable in her demand that only the withdrawal of U.S. and NATO troops will bring relief to her beleaguered people.

The Northern Alliance warlords have not changed their spots since the U.S. put them in power after overthrowing the Taliban in 2001. “The situation brought more disaster,” says Joya.

Her suspension from parliament is being challenged legally, but the chances of overturning it appear slim. The Kabul government seems to be ignoring her at present, reports Derrick O’Keefe, the Canadian journalist who assisted Joya with writing her book and beat off a fair bit of competition for the job of working with her.

“She confided that many writers had asked her about writing a book,” O’Keefe tells me, “but she wanted to be sure she could work with someone who would not distort her political message in any way.”