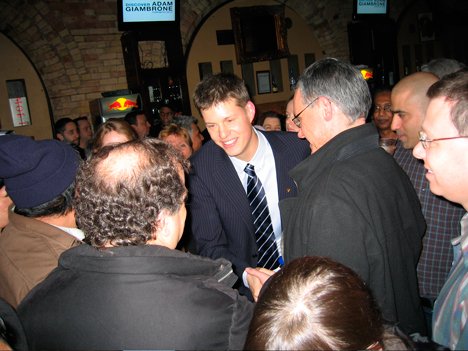 A word of advice to the handlers of mayoral wannabe Adam Giambrone: lose the U2 Beautiful Day bit. Try Ice Cube’s We Had To Tear This Mothafucka Up on your next big campaign stop. Cuz kickin’ up dust is a must in this campaign if there’s any hope of winning it.[rssbreak]

It wasn’t exactly a beautiful launch for the young aspirant to the chief magistrate’s job.

You may have heard by now that a couple of dozen constituents showed up with placards to shout “Adam sucks” from the street outside Revival Monday, February 1, during the big speech officially kicking off his mayoral run.

Even before the ink was dry on the nomination papers he signed earlier in the day at City Hall, there were awkward moments in front of the media assembled to record the event.

Giambrone knew the script, the sound bite he wanted to deliver for the morning radio and TV talk shows.

But he seemed a little nervous, knocked off his stride by the rattattat from the press. One minute he was gesturing confidently to answer the big question on everyone’s mind. Why? “Because I want to build the city,” came the reply. The next minute he was self-consciously sticking his hands in his pockets.

“That’s a wrap,” came the bark from his spinmeister, Robin Sears, emerging from the back of the media pack to throw Giambrone a lifeline when queries turned again to the TTC.

Just what is NDPer-?turned-?Mulroney-spokesperson Sears, aka Vlad the Impaler, doing directing the spin anyway? A story for another day.

The finger’s being pointed at Giambrone, the press’s favourite whipping boy.

According to the pundits, he’s to blame for all that ails public transit. And even if he’s not, he’s got to wear it because he’s the TTC chair and that’s just the way it is. Thus goes the twisted logic. Wait till the press finds out the TTC union will be backing Giambrone. They’re sure to go ballistic on that one.

Our collective consciousness isn’t minding the gap in our thinking. We’ve forgotten that Mike Harris’s holus-bolus cuts to public transit created this whole mess in the first place.

And so follow the predictable calls for Giambrone to resign as TTC chair. What so offends about Adam Giambrone?

Is it the fact that he’s so young? The perception that he’s overly ?ambitious, maybe a little full of himself? Some of his critics are the same ones who moan about the lack of youth participation in municipal politics and are calling for new blood to enliven the races.

The City Hall press corps can be a finicky bunch, willing to ignore the flip-flops of the front-runner so far in this race, one George Smitherman. (See his Transit City meanderings.)

And passing off as informed opinion in newspaper columns the comments of anonymous Twitterers.

Silly me. Last time I looked, Smitherman was the one cutting backroom deals with moneybags Ralph Lean in return for the financial support of the chattering classes and men and women of Bay Street.

Seems a dangerous set of circumstances for a democracy. Is this our Toronto?

Giambrone doesn’t have all the answers. Admittedly, there’s something a little too scripted about the on-?cue smile for the cameras, the YouTube- and Twitter-?propelled buzz.

He’s alienated some constituents over his six years as councillor. He’s still very much a work in progress, a political experiment.

But he has ideas. And thankfully, they don’t involve selling off city assets – or his principles for financial support, like some of his challengers. Even mayoral challenger Joe Pantalone, a defender of the Miller agenda for six years as deputy mayor, is waffling on Transt City.

Giambrone’s emphasis is on the positive, the future. He’s running a campaign that recognizes diversity. Giambrone believes permanent residents should be able to vote. He’s big on city-building and the young.

Did the mainstream notice? Some 75 people volunteered to help the campaign after Giambrone’s speech Monday.

The ethnic press seems to be heeding the message. Giambrone met with a dozen publishers and editors from multicultural media Monday on the resident voting issue. A full-page feature followed in Corriere Canadese Tuesday.

Giambrone’s handlers are promising a campaign unlike any other we’ve seen in municipal politics. It already has been, but not for any of the right reasons.