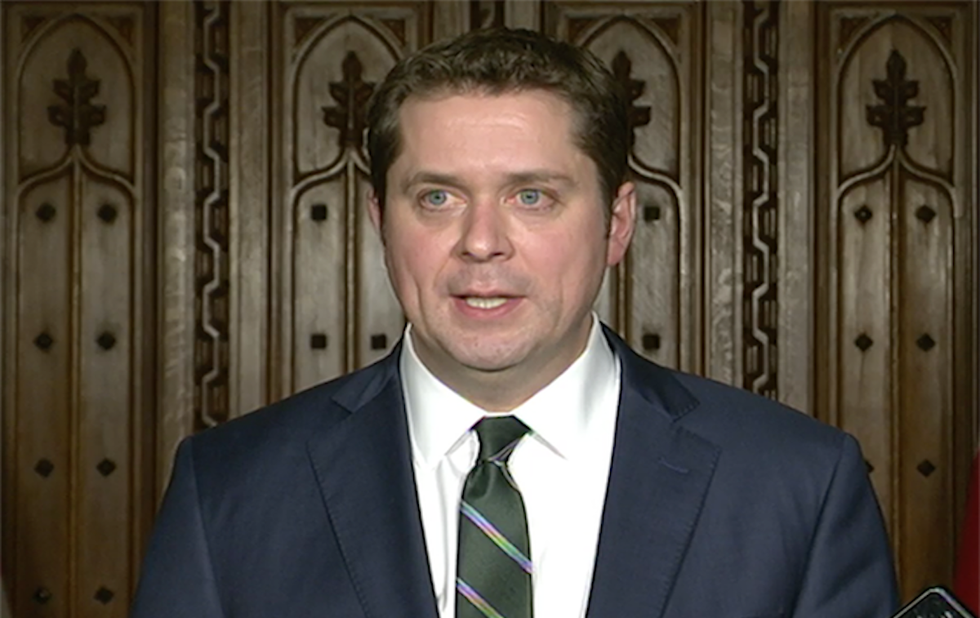 Once again Andrew Scheer, leader of the Conservative Party of Canada and the man who wants to be the country’s next prime minister, has refused to participate in Toronto’s annual Pride parade. It’s the third year in a row that Scheer has declined.

At a time when homophobic violence and abuse has seen a tragic upturn in the west (including Canada) – and when homosexuality is still considered a crime punishable by imprisonment or even execution in numerous countries – the reasons Scheer has offered for his absence have varied. But none have been credible.

There are, of course, a loud number of social conservatives in his party base, but they certainly don’t form a majority, and within the parliamentary caucus leading figures such as Lisa Raitt attended this year’s parade.

But even Conservative MPs that are genuinely supportive of the LGBTQ community are prepared to defend their leader because defeating Justin Trudeau is paramount. It’s why we see them performing intellectual contortions to justify why their man clearly does not like Pride.

Scheer will never state his genuine reasons for boycotting what has become a most important symbol of inclusion in contemporary Canada, because he doesn’t want to be labelled a religious extremist.

But the reality is that Scheer’s conservative Roman Catholic views inform most of his ideas on issues of life and sexuality.

The catechism of the Roman Catholic church teaches that “homosexual acts” are “intrinsically immoral and contrary to the natural law”, and that even such tendencies are “objectively disordered.” In other words, those in same-sex relationships are immoral and unnatural, and even those who are gay but celibate are disordered, which would include the majority of Catholic clergy.

The vast majority of Canadian Catholics, a religion that makes up more than 40 per cent of the country’s population, reject these teachings. Such is the case with Trudeau, for example, who still regards himself as Catholic, as was his father, who was profoundly influenced by his faith but also introduced much of Canada’s first socially liberal legislation.

The issue is one of interpretation, but Scheer is on the orthodox right of his church. This is why he voted against equal marriage when Catholic prime minister Paul Martin led the campaign to introduce it in 2005.

The same applies to Scheer’s approach to abortion and to assisted dying, both considered anathema by the church.

Indeed, when the anti-choice organization RightNow heard of Scheer’s surprise victory in the Conservative leadership race, they celebrated with a thank you in their newsletter to all the volunteers “who worked tirelessly selling memberships.”

They knew the man, knew his father (the Catholic deacon), knew that he voted against Bill C-16, which added “gender expression or identity” as a protection in the Canadian Human Rights Act – and knew that in Saskatchewan where he is MP for Regina-Qu’Appelle, opposition to abortion and LGBTQ rights is acceptable.

So Scheer obfuscates and pretends.

For Stephen Harper, who contrary to what most people believe was not especially religious, this was far less of an issue. For Doug Ford in Ontario it’s even less relevant – he may not be comfortable at Pride, but his philosophy is rooted in the 1950s suburbs rather than in Catholic natural law theory.

With an election on the way, Scheer has tried to paint himself as more of a moderate. It remains to be seen whether journalists will ask whether the man who wants to be prime minister really does believe that LGBTQ people are disordered and immoral, and whether he does think that a woman’s right to choose is akin to murder.

This will be more challenging than commenting on Trudeau’s socks, and will likely see the Conservative spin machine respond with accusations of religious intolerance. To a truly robust media that shouldn’t matter.