Laptop users are born free but everywhere are in chains - the chains here being the prohibitive cost of computers.[rssbreak]Apple's. 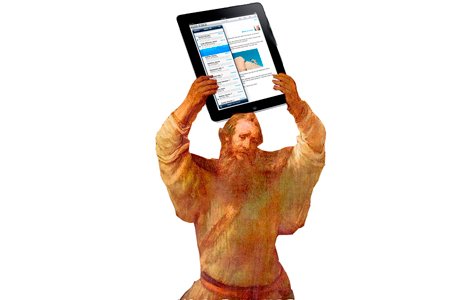 Laptop users are born free but everywhere are in chains – the chains here being the prohibitive cost of computers.[rssbreak]

Apple products, once strictly yuppie accessories, are now productivity-powering gadgets accessible to all. The sleek, one-button approach of the iPod, for instance, tore down gender divides (such gadgets were typically for James Bond-loving men) and class barriers. (iTunes is free, and a Shuffle costs no more than a pair of jeans.)

Now the company looks to be doing the same for laptops.

For years, even the most standard laptop cost more than $1,000, including Apple’s own basic Macbook.

Add the growing cost of Internet service, the scam that is word processing programs, and perhaps soon the misguided micro-charges placed on online news and other Web services.

Then repairs. Taking a busted laptop in to get fixed is like waterboarding your bank account – a world of pain. Look no further than data recovery, the cost of which is needlessly torturous.

Point being, to own and use a laptop is expensive and at times complicated.

The iPad addresses all of this. It’s half the cost of a typical laptop, and its ease of use looks the same as the unstoppable iPhone – that is, no more complicated than a child’s toy. And if there’s a problem, Apple’s ingenious Genius Bar is like a fast food counter: made-to-order service.

So for under $500, just about anyone can own a laptop.

But the iPad isn’t necessarily about owning a computer it’s about accessing the Internet. And that’s Apple’s admirable endgame here: getting the world online.

It almost goes without saying that the Internet offers opportunity. Jobs, education, connections. For those struggling to make ends meet, being online can make the difference.

Netbooks almost bridged the gap but were problem-ridden. Quality and prices varied, and they were largely unavailable in Canada. Adding programs was a headache. And since they were just the mini version, the drawbacks of laptops persisted. Above all, the user experience was subpar, to say the least. Netbooks didn’t actually do much.

Desktops, on the other hand, were over-equipped and therefore bulky, complicated and expensive. Most computer users don’t need the functionality of a giant-sized desktop computer, or even a multi-purpose MacBook Pro.

Updating Facebook, emailing, building resumes, listening to music, storing large files – cloud computing allows for storing documents online instead of on hard drives – these are daily computing needs that an iPad can handle.

Reasons for owning anything other than a tablet are dwindling. A conduit for Internet use is all most people need.

The iPad, with wireless (and optional 3G) and a terrifically simple-looking interface, should surf the Web like nothing else.

According to Jobs, it’s “like holding the Internet in your hands.”

It may not be the ultimate saviour that lifts the world out of poverty, but it certainly looks like it will take the handcuffs off those who could not previously afford an easy, functional, affordable, Internet-ready laptop.

ALSO: Read about Apple’s problem with proprietary software and the mobile Internet here.