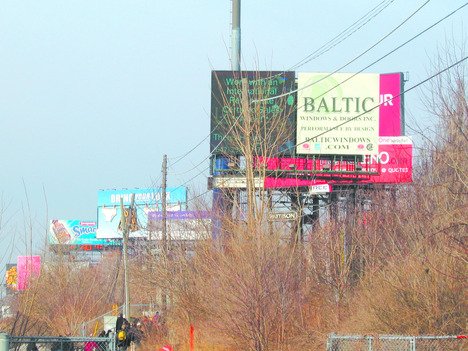 The sign war is over. Score one for artists and public space activists – for now.

After a protracted debate, and some last-minute jockeying by opponents, council has past a plan to harmonize outdated sign bylaws left over from pre-amalgamation days and tax billboards to raise much-needed funds for art and green projects across the city.

Significantly, council’s mushy middle didn’t, as widely feared, cave to the lobbying offensive launched by outdoor advertising companies to quash the fee. A motion by planning and management committee chair Norm Kelly, which would have halved the tax and allowed for double the number of billboards, including electronic ones nearer to intersections, was also defeated.

The supposedly “lame duck” mayor is not so powerless after all, managing to rally council around an initiative backed by a huge city-wide coalition.

Tabello says scores of other signs already up will become uneconomical to operate under the new tax. Hmm. We thought the point was to raise money for the arts. But certainly, some of the visual pollution from more than two decades of needs addressing.

The twist: the system set up to regulate signage will depend on the decisions made by a council-appointed official. And we all know what can happen when it’s one person calling the shots. A three-person panel might have been a better alternative.

How the tax will be collected is another wrinkle that need to be ironed out. What’s to stop outdoor advertisers from setting up dummy companies to get around the tax? Tabello is pushing for deposits to ensure that can’t happen.

Most importantly is whether the new bylaw will stand the test of a court challenge, which is almost certain to come from sign companies. Besides, what’s to stop a new council from undoing the new sign regime? Stayed tuned. [rssbreak]