Who knew about transferring detainees and when? 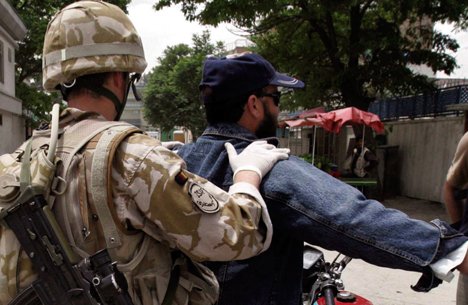 What is it about Canada and torture?

Revelations this week by a high-ranking diplomat that Canadian troops handed prisoners over to Afghan authorities to be tortured has come as a shock to the Opposition benches.

Funny that, considering Liberal leader Micheal Ignatieff’s own tortured musings on torture. Perhaps it’s why Bob Rae led with questioning on the matter in the House.

All of a sudden it’s big news because someone said what human rights groups already knew.

We should be outraged by the revelations, but hardly surprised that Canadian Forces in Afghanistan have been complicit in the torture of mostly innocent civilians.

Amnesty International has been after the feds to clean up its torture act since at least 2005. Testimonials from Afghan prisoners that they were being mistreated were collected in 2008. Amnesty reported then that torture was “rampant and systemic.” The testimonials formed part of a lawsuit filed by Amnesty against the feds aimed at stopping the transfer of prisoners.

How soon we forget.

Amnesty also raised torture concerns in 2007. The human rights group concluded at the time that there was little or no follow up by the Canadian military of prisoners handed over to Afghan authorities. Amnesty’s report also mentions that Canada my have allowed its airspace to be used by CIA flights involved in “extraordinary rendition.”

Half a dozen claims of abuse received by Canadian government from prisoners were reportedly investigated by Canuck authorities last year, but the results of that probe have been kept under wraps, called an issue of national security.

Canada’s has had blood on its hands from the victims of torture since soon after 9/11.

Have we forgotten Maher Arar?

Or the fact the Canadian Force elite Joint Task Force Two commandos were involved in the hand over of the first Guantanamo prisoners to the U.S., including Omar Khadr?

The feds have refused to ask for Khadr’s release, despite his own charges of torture. And being ordered by a federal court to do so. He was a child soldier when taken into custody.

Looking the other way, or willful blindness, instead of standing up for human rights, is the harsh reality of Canada’s foreign policy when it comes to torture.

Besides Arar, Abdullah Almalki, Ahmed El Maati and Muayyed Nureddin, were also detained and tortured, in the same detention centre in Damascus where Arar was held.

Aboufsian Abdelrazik’s case didn’t attract as many headlines as Arar’s et al, but in some ways is a more shocking example of Canadian involvement in torture.

Then there’s Benamar Benatta, the Algerian refugee claimant in immigration detention here who was driven over the border and ended up spending five years behind bars in the U.S. for alleged terrorist links that proved unfounded.

Canada is a signatory to the UN Convention Against Torture.

But what makes Canada’s complicity in this the nastiest of business even more tragic, and incomprehensible, is the fact torture has been shown to elicit unreliable “intelligence,” if it can be called that.

Just another embarrassment for Canada on the international stage brought on by Stephen Harper’s Bush-inspired foreign policy that has only served to make us a target of terrorists.[rssbreak]