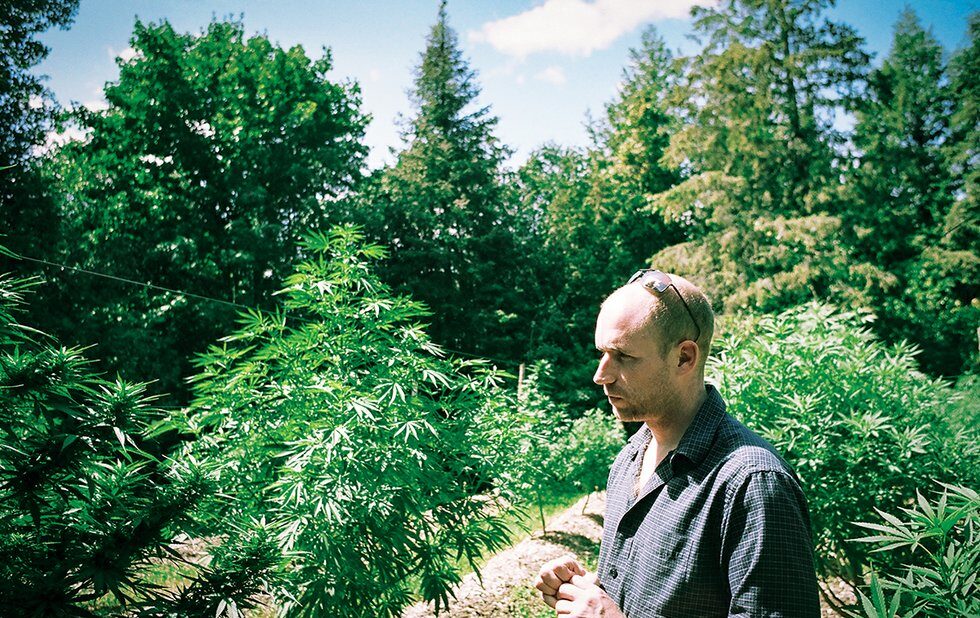 Mark Spear might be a thorn in the side of the Canadian weed industry. Or he may be a heel. He certainly stands out when it comes to gently pissing off the ones writing the rules on the Green Mile of corporate weed on Bay Street.

In an industry hyper-obsessed with compliance and brain-numbing pontifications on the merits of brand-building, it’s hard to see where guys like Spear fit.

It’s late summer as we wander through his personal field of cannabis in the Ottawa Valley. He plucks yellowing leaves off a plant to point out differences in phenotype and shape. Then he sticks his head (and mine) deep into a plant to show off its smell. “This is my sanctuary,” Spear says, as the soft smell of young cannabis plants hangs in the air.

Across the country, there are thousands more like Mark Spear – old-school cannabis folks who know how to grow weed better than anyone, and who want to see cannabis grown in the ground under the Canadian sun. They’re the former outlaws of the cannabis industry who were supposed to benefit the most from legalization.

In virtually every other push for legalization, it’s farmers like Spear who have made up the core of the industry, and who have been able to set up sustainable businesses, free from responsibility to shareholders and c-suite execs.

But in Canada, the Harper-era privatization of medical cannabis has led to a deeply corporatized recreational weed market. And for folks like Spear, it’s all a bit disappointing.

“I don’t think this is really how most people expected legalization to go,” he tells me. His expectations were low to begin with, and yet: “A lot of this I’m not too surprised about, but it’s so far from what California, or Oregon or other states are doing.”

Spear and other small-grow farmers want to change that – to introduce the independent growing community to the legal marketplace. (Or, to drag the latter closer to the former.)

Spear’s first step was to team up with a network of experienced cannabis growers to start Wildfire, a collective of sustainable, outdoor, organic, small-batch cannabis farms. (Wildfire is a rebranding of his previous venture, Burnstown Farms.)

The plan is to sell their weed wholesale to bigger Licensed Producers (LPs), but only the ones who are doing things “the right way,” says Spear. Rather than try to get it onto shelves themselves, Wildfire has signed a supply agreement with Tantalus Labs, which produces sun-grown weed in BC, and a processor named Taima Extracts.

They aren’t taking corporate money, like other craft growers do. Instead, they’re raising $2.5 million through an equity crowdfunding campaign (which is basically the same as regular crowd-funding, but you get a slice of the company).

GOOD WEED SPEAKS FOR ITSELF

Bad news is a regular feature of the weed industry these days. In a rush to get product to shelves, companies got sloppy, and sloppiness can create big problems for large firms.

“People would be shocked by the stuff that doesn’t make it into the newspapers,” says Spear. Until former CannTrust employee Nick Lalonde went public about the company’s illegal plants, whistle-blowers were rare. The weed industry is a bit like the matrix, in that once you begin seeing the problems, the problems are suddenly all around you.

The rise and fall of CannTrust reads like a confirmation that the corporate industry is rotten by nature. The poor reviews of legal products prove that growing weed in a lab-like setting robs it of some part of its soul. And the continued survival of the illicit market confirms that not everyone is buying what big LPs are selling.

Others are hoping that the much-awaited micro-cultivation licence class, which regulates small-scale grows, will be the answer to increasing cynicism about the large-scale legal market. There’s already big money pouring into the micro sector, with organizations looking to build a large roster of growers that can outpace the LPs in quality and, hopefully, match them in volume.

“In the early days at Tweed” – Spear used to work there – “there was so much excitement, there was so much opportunity and everyone was working so well together – sharing ideas and collaborating. It was a really exciting time to be in the industry.”

But as legalization started to take root, things began to change. “Virtually everyone that I started with has left for some reason or another.”

Spear says he never expected to find himself playing the devil on the industry’s shoulder. More than anything, he sees true small-scale outdoor growing as the future. He’d call it craft cannabis, but since everyone calls their cannabis “craft” the word has mostly lost all meaning for him.

Mostly Spear would prefer that more of the cannabis on the legal market taste like someone cared about it.

“There’s people that have never had a plant in their entire lives who are starting these [cannabis] companies, which are really agricultural companies,” Spear says. “They think a clean room is the only way to grow weed.”

It’s a privilege to be able to say any of this, of course, and to have the time and space to slow down in the way Spear suggests.

The big corporate guys, the Bruce Lintons and the Cam Battleys of the world, might say that the business of stocking hundreds of stores across the country with weed is not an easy one. Everything changed the moment weed became a mass commodity consumed by a mass public.

Wildfire is now in the process of getting all of its licensing in order. The plan is to start moving products after next year’s growing season. Spear hopes that as they bring more farmers on board, the collective will be able to scale in a way that avoids the problems with large mono-crops. “There’s a certain size of operation at which point it becomes a much bigger headache,” he says.

The implicit mission of Wildfire is really to show consumers what the industry could have been if it were geared toward farmers and agriculturists.

Word of mouth and product reputation are the real assets that every cannabis company needs. Too many companies have spent too long selling a story about themselves, Spear says.

But good weed speaks for itself.