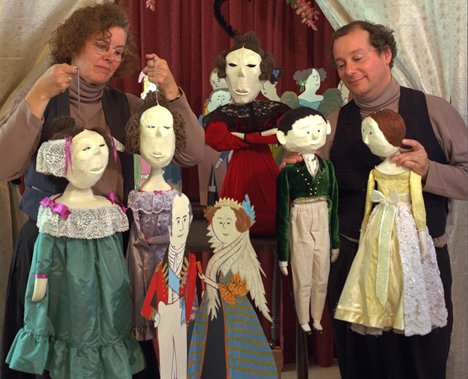 Puppetmongers' Ann and David Powell with the Marionettes "At the Ball".

Hard to believe that it’s been two decades since the brother-and-sister team of David and Ann Powell staged their first holiday show, Tea At The Palace.

The annual presentations are an eagerly awaited event for family audiences always featuring good narratives, they entertain kids with smart puppetry and adults with sly, grown-up references and zingers.

This year’s revival, Cinderella In Muddy York, takes the well-known fairy tale and sets it in 1834 York, soon to be renamed Toronto. In fact, the ball at which the title character meets the prince (Mr. Princely Charming, the lieutenant governor’s son) and loses her glass slipper is a three-day event to celebrate the town’s new title.

The play is filled with bits of Canadian history: one character drinks native herbal tea for a headache, anywhere west of Yonge Street is the bush, the stepmother hopes her family will become part of the upscale Family Compact.

Ella and her surveyor father are long-term settlers her stepmother and stepsisters Zelda and Imelda are recent immigrants, snobby Brits who think nothing in York is quite as good as it is in London. They share a similar smirking, bored expression that says as much as of their words.

The Powells, who narrate, manipulate the puppets and become characters themselves, stage the piece with a fresh cleverness, turning a lakeside scene into a busy kitchen table, magically turning a pumpkin into Cinderella’s carriage and creating cutout cardboard figures for the dancing ball guests.

The production has a charming homespun quality that doesn’t undercut all the imaginative touches but rather complements them.

Like all Puppetongers’ shows, Cinderella In Muddy York is worth a second look, especially if youngsters five and older join you. There’s no better time to introduce them to good theatre.

And for those interested in making puppets and not just watching them, the Powells offer post-show workshops from December 26 to 29 for an additional $10.