Frank Gehry’s celebrated Transformation AGO is a surprising also-ran at the Toronto Urban Design Awards.

The lights on the unforgettable Second World War-era marquee of the Kingsway Theatre come back to life after two years in the dark.

Pieces of the vaunted street furniture rollout begin popping up in curious places. And, as some critics feared, pedestrian concerns are lost in the sidewalk shuffle for space.

Project Bookmark Canada unveils its series of plaques “to bring the imagined landscapes of stories and poems into our physical spaces” with a marker excerpting Michael Ondaatje’s In The Skin Of A Lion on the east side of the Bloor Viaduct.

A $34 million redo of the Metro Reference Library is formally unveiled. Finally, some relief from the oppressive red brick monster.

The Bloor/Gladstone Library reopens after a four-year remake with a swanky new see-through glass wing. 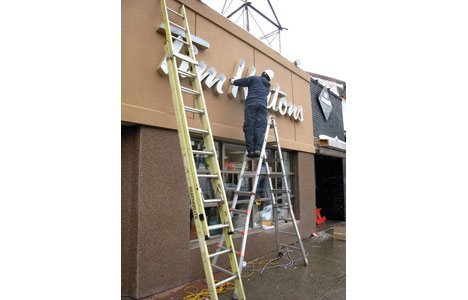 Timmy’s takes another bite out of the core and Queen West’s cool (?) with its takeover of the Queenshead. 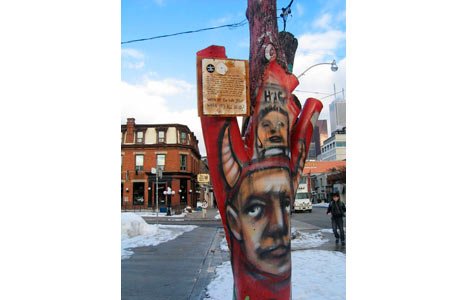 The Hug Me Tree, a Queen West landmark mysteriously knocked down last summer, is unveiled in its new surroundings at the ROM as part of the Housepaint, Phase II: Shelter exhibit.