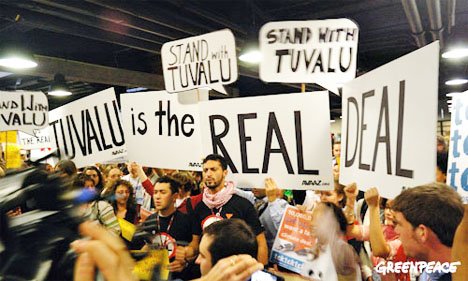 YouTube and CNN are teaming up on an effort called Raise Your Voice. The project sends your questions to key people at COP15. You can ask questions here, and if yours are at the top of the heap, you’ll get an answer from someone like Kofi Annan, Thomas Friedman, Yvo de Boer.

The 2° limit that climate negotiators are hoping to lock down at the COP15 talks is being rejected by the Alliance of Small Island States. These 43 small vulnerable states, lead by Tuvalu, suggest a 1.5° target to avoid further degradation of their fish stocks and coral reefs. The likelihood of the limit being lowered is pretty low, though.

With over fifty videos already posted on their site, tcktcktck is a great resource for checking out COP15 protests and interviews with everyone from Naomi Klein to infamous climate change deniers like Christopher Monckton.

A coalition of American indigenous groups marched to the U.S. embassy in Copenhagen to send President Obama the message that energy corporations are engaging in a war against native lands.

UN climate chief Yvo de Boer emphasized that the Kyoto Protocol would live on despite the wishes of the rich nations.

Klimaforum (The People’s Summit) held it’s fourth all-day session in a conference complex in the centre of Copenhagen.

La Via Campesina hosted a candle-lit vigil in Copenhagen City Centre for all small farmers of poor nations who are victims of climate change.

350.org activists are thrilled that some official delegates are sporting stylish 350 ties to support a 350 ppm target.[rssbreak]