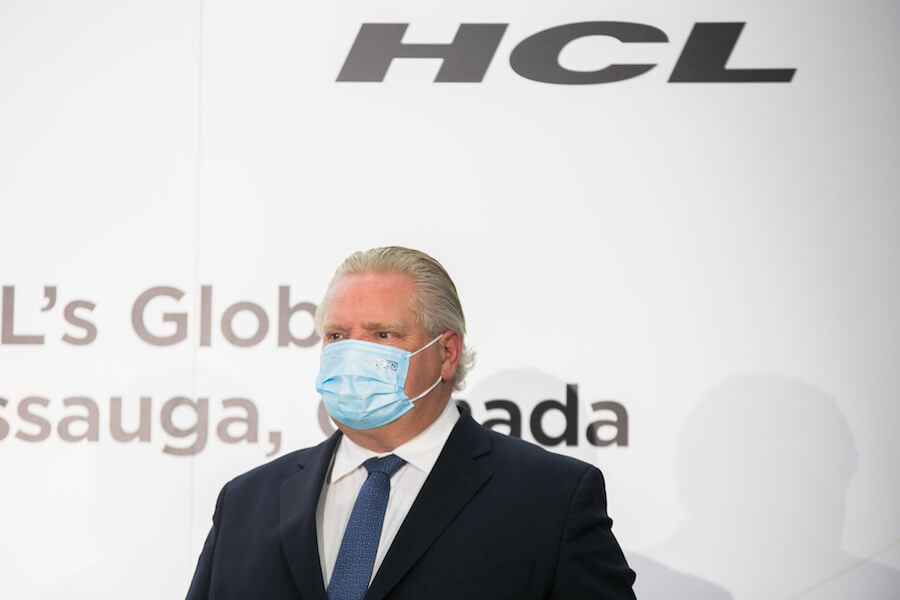 Only days after announcing the appointment of hired gun Kory Teneycke to manage its election campaign, the PC Party of Ontario has unveiled its first attack ad aimed at deflecting attention from Doug Ford’s calamitous handling of the COVID crisis.

The video pinning the blame for the current crisis in Ontario on the Trudeau government’s border policies shows planes swooping down on Toronto and what looks like a bloodstain spreading across a map of Canada. The visuals for the ad are apparently inspired by a game called The  Plague, in which a virus infects the planet. The not-so-veiled xenophobia is also unmistakable with its reference to “mutant” strains brought in by travellers from other countries. And so begins what will be a year-long effort to soften up the masses for Ford’s re-election bid in 2022.

The premier weighed in on Twitter on Tuesday by sharing a graphic of airport arrivals at Pearson. Only, most of the flights on the graphic are from Calgary, Ottawa, Winnipeg and Edmonton. Looks like the folks handling Ford’s communications these days have taken a page out of federal Conservative leader Erin O’Toole’s social media for dummies handbook. Now the premier’s Twitter account is allegedly doctoring tweets.

Pay no mind. Ford’s advisers have been busy testing focus groups. They know what the people are thinking. So expect more lowest-common-denominator misinformation to come down the pipe. No doubt, the rough outlines are being worked out to pin the blame for the third wave now wreaking havoc on the province on Canada’s relationship with China. A summertime tour of Ford-friendly ridings to help Ontarians forget the carnage is also in the works.

The truth is that non-essential travel has been banned in Canada for more than a year. In fact, Ford was pushing like mad back in December for the feds to lift the 14-day quarantine required for travellers entering the country. But the script being written now is to blame Trudeau for a fourth wave of the virus that hasn’t happened yet.

There are a lot of words that can be used to describe the federal government’s response to the coronavirus. Negligent is not one of them. Ford on the other hand….

It’s vile and profoundly cynical politics the PCs are playing, given the fact that the coronavirus has claimed more than 8,000 lives in Ontario, many of which could have been avoided if the Ford government had been more inclined to listen to public health advice. But it’s also a good reminder of what a nasty son of gun Ford really is.

It was probably only going to be a matter of time before his true colours shone through. The pandemic has provided a modicum of cover where that’s concerned. But it took his re-election chances going south for Ford to revert to his true self, which is to say a demagogue.

Check out the war PC operatives are now waging on social media to get Ford out of the hole he’s fixed for himself. They’re even taking aim at the PM’s wife for offering yoga classes to government employees stressed out by the pandemic. Even conservative columnists who should know better have gotten in on Ford’s border boondoggle, adopting the language of ReTrumplicans south of the border to label Trudeau supporters Tru-Anons.

Ford friendlies in the media are the premier’s ace in the hole. To be sure, you can draw a straight line connecting the premier’s office to higher-ups in the Post Media empire and from there to the folks now advising the premier on the shady dealings and voter suppression tactics used by Cons when Harper was in government.

There has been much deconstruction of Ford since the pandemic started with his “we’re all in this together” Churchill routine, which has now veered into the current malaise.

Some commentators have offered various opinions on how he’s managed to screw up the government’s COVID response so bad. They’ve ventured that it’s not so much that Ford is incompetent; “he just wants to be liked,” is how they’ve explained his scattered decision-making.

It’s never a good idea to try to get too much into Ford’s head. What you will find is a bit of a mess. But what’s going on in there is actually more nefarious than the “aw, shucks” routine Ford’s supporters would have us believe. Sometimes that’s hard to understand because most of us can’t believe that anyone could be so callous. But back to that re-election bid….

Seems like an eon ago now, but it’s worth remembering that Ford practically stole the PC leadership from Christine Elliott amid accusations of voting irregularities and a campaign that relied on a social conservative base in the party and MPPs that now openly entertain COVID conspiracies. Ford was cast as the candidate to take the party back to its roots after Patrick Brown’s tack to the left. The Globe and Mail was moved to remark in its opinion pages back then about how we were witnessing a more mature Ford take the helm of the party. How do you like him now?