Climate change deniers think they have their smoking gun, but who killed the electric car? 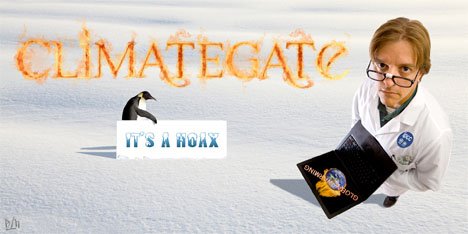 I like conspiracy theories just as much as the next guy. Hear the one about Stephen Harper’s mascara?

The mad ramblings of global warming deniers over something dubbed Climategate has made for some amusing reading on the comment sections of internet sites, including this one.

The flurry of fantasy has been sparked by the emergence of emails on the worldwide web hacked from the computers of the Climate Research Unit in the UK. What do they reveal?

John Bennett of the Sierra Club of Canada can barely control his disgust at all the media attention the contents of the emails has received. He’s asked the RCMP to investigate how the Calgary-based website Friends of Science got hold of the emails, which are technically stolen property.

Can’t blame eco groups for getting a bit defensive. The jury’s hardly out on climate change. The facts are indisputable. The evidence is right in our faces. All you have to do is look out the window. You’d think that climate change skeptics, a mostly conservative lot, would be more concerned about the financial costs of global warming. Right here in our own backyard, flooding like we haven’t seen in a century is costing us millions in repairs.

It’s an unfortunate consequence of the internet age that falsehoods and innuendo can gain widespread exposure and traction in the public discourse. Post something and before you know it…

There is no line between perception and reality. Perception is reality. And so it is with Climategate.

One British research tested the theory by calling up respected publications in the UK and planting deliberately false stories about celebs just to see what would happen. The results were shocking but not entirely surprising.

Some papers didn’t even bother making a phone call to check “news” tips that were so obviously outlandish to take seriously. In almost every instance, the papers targeted went to press straight away with the tantalizing, yet false, tidbits.

With Climategate, much has been written about the reference to the word “trick” in some of the emails, a word scientists like to use to describe a mathematical quirk or shortcut. No smoking gun, really.

Says Bennett: “If you look at my personal emails you’ll see a number of messages to my colleague about meeting at so and so hotel. If you didn’t know the context you might think we were having an affair.”

But not so with Climategate. The deniers have all the evidence they need, come hell or high water.

The more burning question: who hacked the emails and for what reason?

I have my own theory: it was Big Oil. Let’s investigate that Saudi link shall we? Or for that matter, the aforementioned Friends of Science and donations its accepted in the past from petrol giants.

We all know the lengths Big Tobacco went to perpetuate the myth that smoking is not harmful to our health. Why not Big Oil? Can I ask, who killed the electric car? Hmm.