Network is a hit online, but foes keep pushing anti-Semitic button ahead of CRTC fight 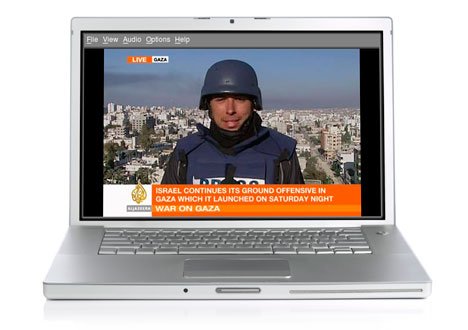 Al Jazeera was the only media outlet in Gaza during Israels recent siege.

Al Jazeera was the only media outlet in Gaza during Israel’s recent siege.

It’s hard to find a winner in the Gaza war. Except maybe the news industry, particularly Al Jazeera, the only international news outfit with reporters inside the territory during the siege.

Of course, it’s understandable if you missed the compelling, on-the-ground coverage. The only way you could have caught it was online, via Al Jazeera’s English or Arabic version.

Though it’s somewhat less convenient than the TV remote, millions of North Americans took advantage of the online option. From November to January, the Web audience for Al Jazeera English shot up 22 per cent, 600 per cent when it came to video reports.

Riding the bounce, the station’s managing director, Tony Burman, former editor-in-chief of CBC News, was making the rounds last month in Toronto, talking up the Qatar-funded channel viewed in more than 100 countries – including Israel – but not in Canada or the U.S.

Once again, Al Jazeera is approaching the CRTC for a spot on the TV dial. But unlike last time, when the regulator, under pressure from mainstream Jewish groups, laid on licence conditions so severe that it was a foregone conclusion no carrier would add it, this time Al Jazeera English has a plan.

Step one is enlisting the support of the thousands of North Americans who have already sampled the merchandise. Of the 22 million monthly hits AJE gets, more than half are from Canada and the U.S. Many people access it free and full-screen through livestation.com.

What they’re seeing looks a lot like BBC, but with more brown and black faces. The polished programming ranges from Brit chat show host David Frost to field documentaries like Dining With Terrorists, exploring why people take up arms.

The product seems to be selling itself. But then there’s Burman. The old-school newshound commutes from Yonge and Summerhill to his apartment in Doha, overlooking the Persian Gulf with Iran on the other side.

One of his tasks over the nine months he’s had the gig has been to “rationalize” the Arabic and English channels he carried out a similar cost-saving job at the dual-language CBC. Every day at 1 pm, Burman sits down with the head of the TV channel that was the sworn enemy of the Bushies.

No doubt he’s a reassuring figure for skeptics who see Al Jazeera as an alien news force. At a meeting of the Canadian Journalism Foundation on February 17 that’s filled with famous TV faces, the audience quizzes Burman about political interference from the Qatari government. There isn’t any, he says. And those allegations about anti-Semitic rhetoric?

Most of the controversial comments, he says, have been aired on Al Jazeera Mubashir (Al Jazeera Direct), a C-SPAN-like channel that carries live broadcasts such as news conferences. “I accept that on occasion inflammatory and offensive comments have been made. In Israel, too, hateful things are said from time to time.”

Later in the week, Burman appears as a guest of the Ramsay Luncheon series at the Sutton Place Hotel, where he’s interviewed by political pollster Allan Gregg. “What’s a nice guy like you doing shilling for al Qaeda?” Gregg asks. The question gets a few laughs but likely expresses some of the doubts in the room, too.

Burman tells me later he’s already receiving positive feedback and expects the channel to be on our TV sets by fall. “Our relationship with major satellite and cable companies is quite good. They’ve left no doubt that when we get the CRTC household seal of approval they’ll include us right away. They’re business people. After Gaza, it’s a no-brainer.”

That wouldn’t exactly be the case for some local Jewish organizations, which plan to mount the same kind of offensive that kept the Arabic channel off our airwaves five years ago. A CRTC rep says the application has not yet been received but that when it is, the regulator will be open to public response.

That it will surely get. Bernie Farber, CEO of the Canadian Jewish Congress, fears the new English network could indulge in the same anti-Semitic commentary its sister channels have been criticized for. “The track record of Al Jazeera English is non-existent at this point.”

In fact, he wants the CRTC to impose the same rules on AJE that it mandated for Arabic Al Jazeera when it applied for approval: a time delay, constant monitoring and bleeping of anything construed as a violation of Canada’s hate laws, costly hurdles that caused cable companies to take a pass.

But for someone who’s prepared to prescribe what Canadians should be allowed to watch, Farber doesn’t seem too clued in.

“I’ve seen Al Jazeera English, and nothing has raised alarm bells,” he says. But he acknowledges that he’s only seen the channel on a couple of occasions while travelling in Europe, where it’s available on regular TV. He appears not to realize that Al Jazeera is available in Canada online, “track record” and all.