We need a better way to remove wildlife from Toronto 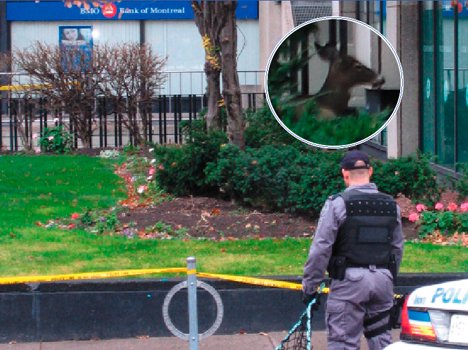 A final thought or two about that deer that decided to wander into the downtown core Tuesday morning.

I find myself becoming more alarmed by the situation the more I think about it.

Maybe it was that footage caught on video of the poor animal convulsing from the tasering by police. Or, the asinine comments from police in press accounts that followed trying to explain the over-the-top response.

“She’s a wild animal, fairly large… fairly big…” blubbered one copper. “If it runs and hits a pedestrian…” Deer can be dangerous, don’t you know.

The scene outside the Dundas and Edward Street near where the deer decided to take up residence bordered on the surreal. Someone in the crowd reported hearing from one cop that authorities were worried the doe might jump through the plate glass window of the building where she’d decided to take up residence. People inside had already been evacuated.

Then a couple of members of the ETF showed up holding something vaguely resembling a volleyball net.

The Globe’s editors packaged the whole incident on its front page the next day as a Calgary versus Toronto thing.

The point: in Calgary authorities know how to deal with a stray deer. It gets shot. Period, end of story. Here in the Big Smoke we close off whole sections of the downtown for hours and use a tranquilizer dart – a twee red one at that – to subdue our quarry. Tee hee. We’re so liberal.

I don’t know what I expected to see before I arrived. But there was none of the tumult being reported on the radio, which left the impression of some crazed antelope corralled by yellow tape. The entire scene was remarkably… quiet.

You could only see the deer’s head from behind a line of bushes. From across the street it looked like the deer may have been standing in an empty stairwell of the adjacent building.

It only became clear she had been lying down all along when she bolted upright from the pinch of that tranquilizer dart fired in her hind. Otherwise, the deer looked perfectly comfortable sitting there, a little bored even, while more cops arrived.

This was no crazed, caught in the headlights beast trying to figure out how to escape the ever shrinking perimeter being set up around her.

She may have been content just to stay there until it got safer to leave, except for all the fuss being caused by the crazy humans. In, er, hindsight, we may have been better off summoning a deer whisperer to try coax the animal back from whence she came. Maybe a police escort.

But certainly these options would have been more humane than tranquilizing, tasering and then relocating the deer, which may die anyway from the associated stress.

A new protocol is in order.

The pressures of urbanization will no doubt coax more animals out of the wild spaces around the city. We need to start thinking about ways to prevent wild animals from wandering into our midst. Protecting areas where there’s enough food to sustain habitat is one idea. Perhaps managing populations where they live. The next deer may not be so lucky. [rssbreak]