Kids in the Hall premiere draws out Toronto comics 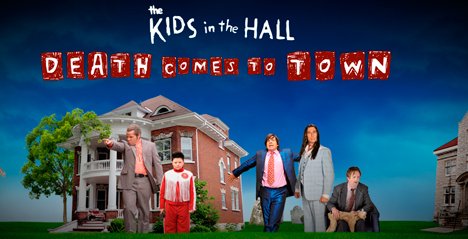 Glad there were no embittered comic unibombers outside the Rivoli last night. If a proverbial bomb had gone off at the second floor launch of the Kids In The Hall’s new TV series, there’d be literally no local comedy industry left.

Not only were the five kids (Mark McKinney, Bruce McCulloch, Dave Foley, Kevin McDonald and Scott Thompson) having fun above the venue where they started it all. But milling about the packed reception were a who’s who of comedy and media talent.

After a screening of the first episode of the eight-part CBC series, Death Comes To Town (which begins airing tonight at 9 pm), I caught up with a few comics I hadn’t seen in a while.

Together, Sperling and Pavlinek are developing a new web series, which sends up all the terrible motherhood shows out there. Plus the two have created duo called Regan and Tara – a take on certain Sapphic sisters.

Air Farce’s Alan Park said he’s in the midst of a big life change and is developing new material based on that. Plus he wants to tour the country with his Barack Obama act in a version that’s bluer than what CBC allowed on the now-defunct show.

And it was good to catch up with stand-up Kristeen von Hagen, who’s now living in Manhattan. She’s in town to do some sets but also to help write for CBC’s Test The Nation.

Speaking of CBC, Jian Ghomeshi and Sook-Yin Li were both there. And when was the last time a mayor showed up at an alternative comedy show? Yet Mayor Miller was there, laughing it up.

Reaction to the first episode was good. I’ve seen the first two episodes, and it’s a bit like Scream meets Twin Peaks. There are lots costume changes – the production logistics must have been a bitch – and the performances are solid, with no shameless mugging.

Foley’s mayor’s wife is by far the most convincing bit of drag I’ve seen the kids perform. And as the series’ titular Death, McKinney sports a bulging leather jockstrap beneath a bulging, pale belly.