The mayor's dreamed up private-public transit plan has real costs 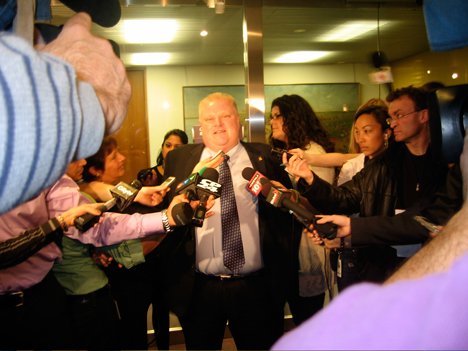 Mayor Rob Ford met with the media Thursday afternoon outside his City Hall office in a scrum called, or so the media thought, to talk about his plan to raise private money to fund his subway to Venus, er Scarborough Town Centre.

Instead, it seems the presser was held to offer Torontonians assurances that the mayor is feeling fine and back saving the taxpayers money after surgery to remove a 5 mm kidney stone last week.

A City Hall press gallery increasingly agitated about access to the mayor, or more precisely, the lack thereof, pressed Ford on the access question: is Ford the mayor or is his older brother Doug, the councillor from Ward 2, the guy calling the shots around here?

The mayor laughed. Shrugged. Rasped something about being the mayor. And then was quickly pulled from the horde by press secretary Adrienne Batra. Just like that, they were back behind the double-locked glass doors of the mayor’s office, safe from the media hordes. That took all of three minutes.

There were few details offered by Ford on his “public-private” funding plan for transit, sent to the provincial transit authority, Metrolinx, on Tuesday, although parts of that have already been leaked.

A curious turn on the transit file.

The TTC is supposed to be working on an alternative to Transit City for the mayor. And presenting that plan to the mayor, some time soon. The impression left up till now was that the TTC, mayor and Metrolinx would at some point in the near future walking hand-in-hand to a dais to announce their plan.

Now it looks like transit policy is being sketched in the mayor’s office. Call it transit planning by politics.

It could be that Ford is getting some push back from the province on his pitch for a Sheppard subway. Mihevc thinks he may be.

The province promised light rail along Sheppard for the Pan Am Games. And has put Ford on notice that the city will be on the hook for $130 million already spent on plans for the Sheppard LRT proposed under Transit City, if it’s replaced with a subway.

In Mihevc’s estimation, there’s also an equity issue for the Grits to weigh when it comes to funding a Sheppard subway over Transit City. That being: will Scarborough be better served by a subway or light rail? The latter seems to be the answer to that question.

Ford, though, seems not to be trying to push his ample political weight around to put the heat on the province to accept his subway plan, by saying he’s got private money for it. The mayor knows everything can change after the next provincial election in October.

It’ll be a different ball game if McGuinty’s still in the premier’s chair then.

Right now, though, McGuinty is looking at his declining poll numbers, seeing Ford’s support in Toronto and getting nervous about the prospect of losing seats in Scarborough. Which is why Transportation Minister Kathleen Wynne in speaking in soft tones about being “cautiously optimistic” about the province and city finding common ground on Ford’s public-private subway dreaming.

Could the Libs be fashioning an election campaign in Toronto opposing Ford’s subway plan and keeping Transit City? Now that would be interesting.

The money’s already there for Transit City. Ford’s private-public partnership for Sheppard, what we can surmise from it so far, could end up being another boondoggle with taxpayers footing the bill. We’ve seen this movie before with private money for a Sheppard subway, only starring Mel Lastman, which ended costing taxpayers close to a billion bucks. And continues to lose money every year for the TTC because there aren’t the densities to support it.

Mihevc, doesn’t think there’s the $3 billion that’ll be needed out there in private sector to build Ford’s subway, anyway. He says either property taxes will have to be raised, or development charges levied, to raise the cash. To say nothing of the densities that will have to be given away along the route to make Ford’s plan financially feasible.

According to Councillor Shelley Carroll, that would mean 40-storey towers at major intersections all along Sheppard.

Another thing the mayor hasn’t factored into his calculations, says Carroll, are the operating costs of an expanded subway system. She notes that the city can barely scrape up enough money now to keep the current system clean and maintained.

More on this story as it develops.