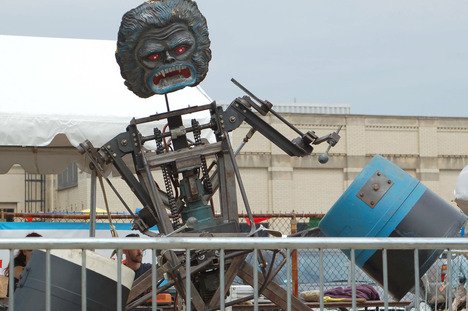 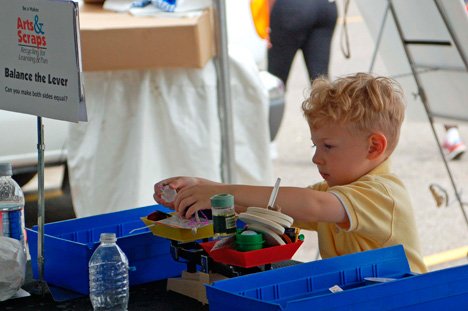 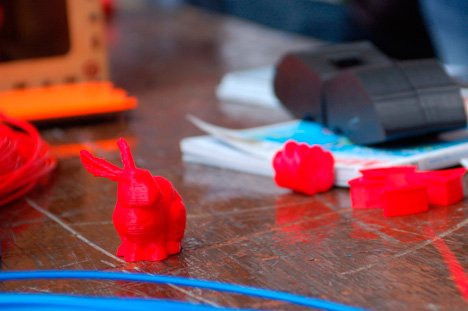 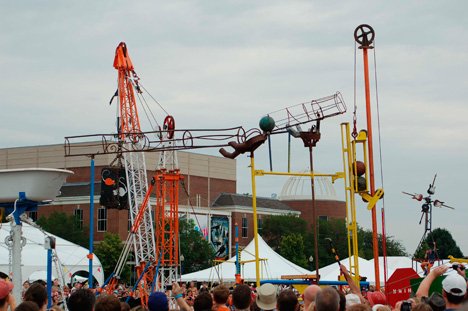 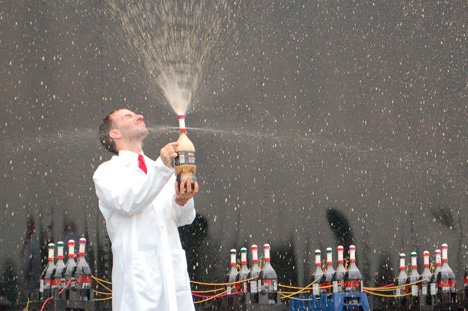 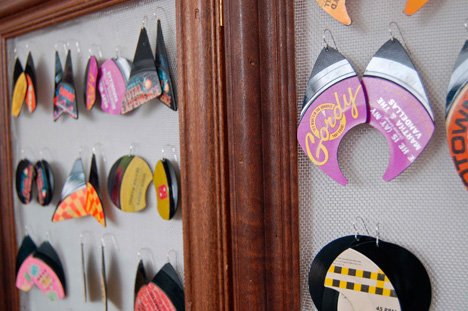 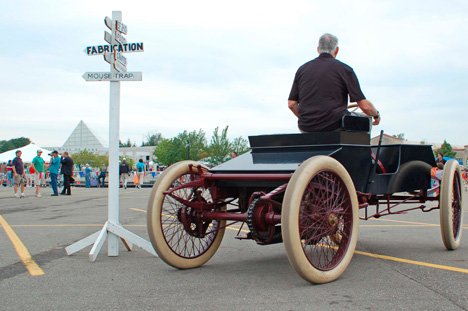 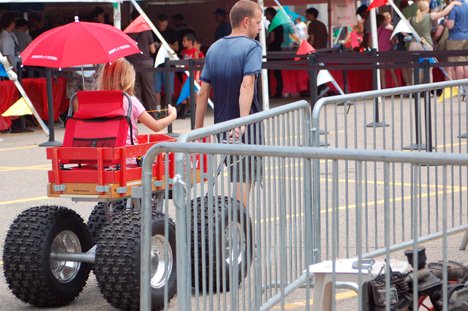 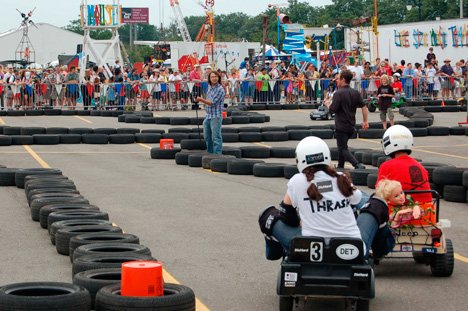 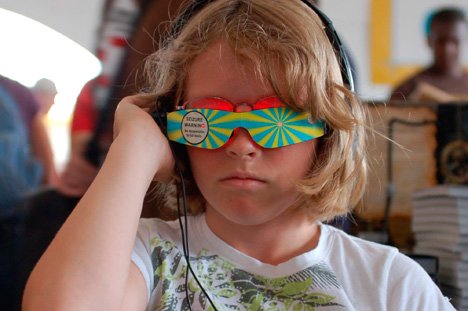 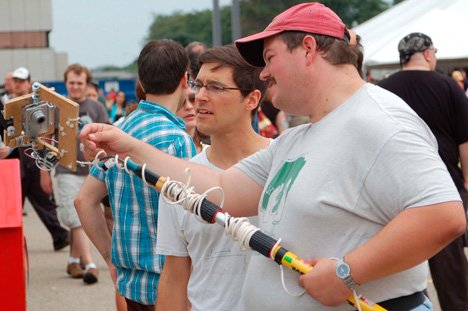 Detroit – I’m watching a robot chase a kid around a parking lot. It’s an 8-foot-tall skull with flaming eyes and snapping jaws of iron. “I don’t like bicycles!” it screams at the boy wheeling in circles, who loves every minute of it.

The robot is controlled by art/engineering steam-tech aficionados (steam punks) from the Madagascar Institute in Brooklyn and was built in a garage somewhere in Detroit. I’m at Maker Faire (July 31-August 1), the largest DIY festival in the world, along with thousands of other self-reliant geeks and craft wizards.

A county-fair-meets-science-centre, the Faire has been held every year since 2006 in San Francisco and recently expanded to Detroit and New York City. A celebration of the inventive spirit, it’s run mostly by volunteer engineers and tinkerers, many of whom have been forced out of work in the economic downturn.

For this weekend, the Faire has taken over the Henry Ford Museum in Dearborn, just outside Detroit, turning ground zero for the auto industry’s collapse into a hotbed of repurposing born of necessity.

Visitors can take part in robotics competitions, witness a life-sized Mousetrap game, learn how to hack a circuit board or make their own musical instruments.

“There are seven hackerspaces within a 100-mile radius of Detroit,” says Maker Faire director Sherry Huss, referring to the hubs of “makers” who hone their skills by creating novel inventions out of junk or a ingeniously soldered circuit board.

“When you hit the bottom, you really get an opportunity to recreate your environment.”

The maker philosophy is simple: if you can’t hack it, you don’t own it. Makers are devoted to recycling, repurposing, crafting and inventing. This applies to a remarkable range of stuff: computers, musical instruments, clothes, bicycles, even food.

Greg Willerer from Brother Nature Farms has reclaimed vacant lots in Detroit to grow organic food. “Folks losing their jobs say, ‘Okay, what am I going to do?'” says Huss, “‘Now I might align my passion with my vocation.'”

Tiffany Threadgould from RePlayGround has come up with a business model based on reduced consumption. She makes belts, bags, bowls and business card holders out of recycled materials like juice boxes and electronic cables. Instead of selling her work, she leads workshops on repurposing junk.

“I want to inspire people to reuse material,” she says.

She certainly lives her philosophy. As we’re talking, a woman approaches the table, interested in buying a checkers set Threadgould has made out of canvas and bottle caps. “They’re not for sale,” she says, “but the plans are up on my website.”

The woman persists, but Threadgould holds firm: “It would really be better if you made it yourself.”

Later, I watch as Simon, a seven-year-old from Dearborn Heights, chooses an old orange T-shirt for a project. He’s using a sewing machine for the first time. “I made a bag to put stuff in,” he tells me later. When I ask what else he’d like to make, he gets excited. “I’m going to make some masks.”

Says sewing workshop organizer Christy Howden, “Rather than throwing things away, we like to teach people how to experiment with them. Doing something with your hands has value,” she says.

It’s hard for people steeped in Chicago-school economics to discern the motivations of the makers. Most don’t make money from their work but are eager to share what they’ve discovered through their tinkering.

A representative from the U.S. Patent Office, here to provide economic protection for all these cool inventions, stands in front of his classic poster-board display looking baffled as people zoom past in not even vaguely roadworthy flame-emitting cars or on home-made bicycles.

“The currency here is ideas, not money,” says Huss.

Workshops teach people how to knit, hack electronics and pick a lock. I sit down at a soldering workshop led by Bobby, a volunteer from the Detroit area who says he’s “into amateur electronics.” He’s a good teacher, and within five minutes I’ve made my own blinking LED button.

My swelling ego is quickly humbled by a demonstration of the MakerBot, a $950 kit that customers assemble into a desktop 3-D printer that allows them to print any 3-D object as long as it’s smaller than a soup bowl. “It’s like having a factory in your office,” says designer Bre Pettis, who cut his teeth hacking electronics at NYC Resistor, a hackerspace he helped start in Brooklyn.

“It uses the same material as Lego,” he says, and employs open-source design software. “The knob on my air conditioner broke the other day,” he says, “so I just printed up a new one.”

Not all the inventions are game-changers like Pettis’s MakerBot. Participants can make a marshmallow machine gun, sandals out of billboard vinyl, or a steel drum out of an old propane bottle. And, of course, they can make a spectacular mess by dropping Mentos into bottles of Coke.

Stephen Voltz and Fritz Grobe, also known as Eepybird, are the stars of Maker Faire, performing their YouTube-famous routine of setting off a choreographed sequence of spouting pop bottles. Fritz’s advice for the crowd: “Do try this at home!”

Thank goodness Detroit has been left to the hackers – there’s hope for it yet.