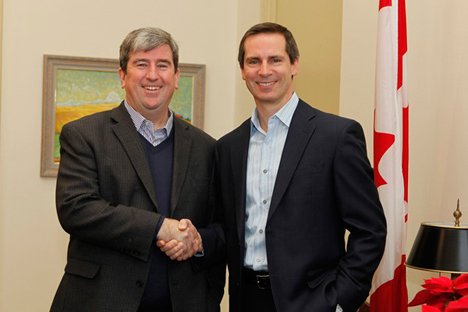 Last Thursday’s byelection race in Toronto Centre was never really in doubt for the provincial Liberals.

In the end, the “race” was more coronation than election, with parachute candidate Glen Murray coasting to the finish on the Liberal brand (if there still is such a thing) and the coattails of endorsements from outgoing MPP George Smitherman and incumbent MP Bob Rae, among other high-profile Grits.

For the NDP, which managed to finish second and snag more than 30 per cent of the vote, some 14 points more than in the last general election in the riding, the impressive showing is a huge moral victory.

The big losers were the Tories, which ran lawyer Pamela Taylor for the second time, but finished in third this time well behind the NDP, tallying a mere 4,000-plus votes, half the number as last time.

That’s two Toronto byelections under Tim Hudak’s crew and two resounding defeats, both times while trying to put a more progressive face on the party by running female candidates. And both times pushing the Harmonized Sales Tax as the hot-button issue. Time for a strategy rethink?

For the Tories, the hoped-for breakthroughs haven’t materialized in Toronto. And why would they? If Hudak’s ascension as leader signifies anything, it’s that the Tories have become a rural rump.

The real danger is that the party will begin to lose ground in the 905 if it doesn’t start taking more centrist policy positions. The attention-seeking antics in the Legislature and continued harping on the HST is obviously not going anywhere.

The party is already showing signs of descending into oblivion.

The appointment of Bob Runciman to the Senate last week leaves a huge hole.

But more importantly it’s laying bare party divisions between the guns and property rights crowd anchoring the far right of the party and the Hudak faction trying to resuscitate the Mike Harris devolution.

Rather than a smooth transition to fill the vacancy left by Runciman in Leeds-Grenville ahead of next month’s byelection in the Eastern Ontario riding, Runciman’s departure triggered a nomination battle.

Runciman’s former executive assistant, Steve Clark, managed to win the party’s nomination Saturday (February 6), but not without a challenge from Brockville mayor David Henderson and the last-minute dropping out of poultry farmer Sean Carmichael.

Carmichael was the wild card in the bunch, a protégé of the fringe led by former leadership contender Randy Hillier that’s pushing the party further right.

Hillier, word has it, has been on the outs with Hudak ever since the Tories’ HST filibuster in the Legislature. Hillier openly defied his leader, plunking himself right in the middle of the filibuster that was assigned to MPP Bill Murdoch to lead.

The emerging story line for the Progressive Conservative party: that it’s just a bunch of rural right wingers.

Hudak’s crew needs a big win in Leeds-Grenville to show voters and the party’s core that the PCs are still a viable option.

Or, it could get sticky for Hudak, notes one Queen’s Park observer, when it comes time to raising money from business types in the Big Smoke come election time in 2011.[rssbreak]