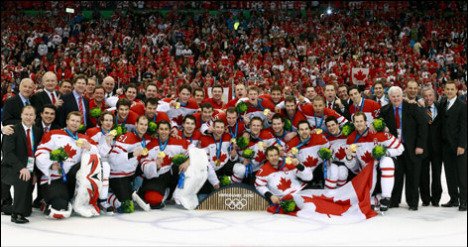 After the fact, Neil Young made an appearance at the closing ceremonies to play Long May You Run.

And, just for good measure, here’s a rundown of all the failings at the Vancouver Olympics, from start to finish.

Chile suffered an enormous earthquake over the weekend. Charities are mobilized, as are the U.N.

Here’s how to donate via the Canadian Red Cross.

Save The Children is one way to help. Google is another, with an amazing web application called the Chile person finder to use information to find victims.

Here are some mobile campaigns to text donations in Canada.

On behalf of UNICEF Canada

On behalf of UNICEF Canada

And here’s the outgoing Chilean president making an appeal for help.