Not as well known outside China as his revolutionary contemporary, Chiang Kai-shek, Sun is regarded as the father of modern China 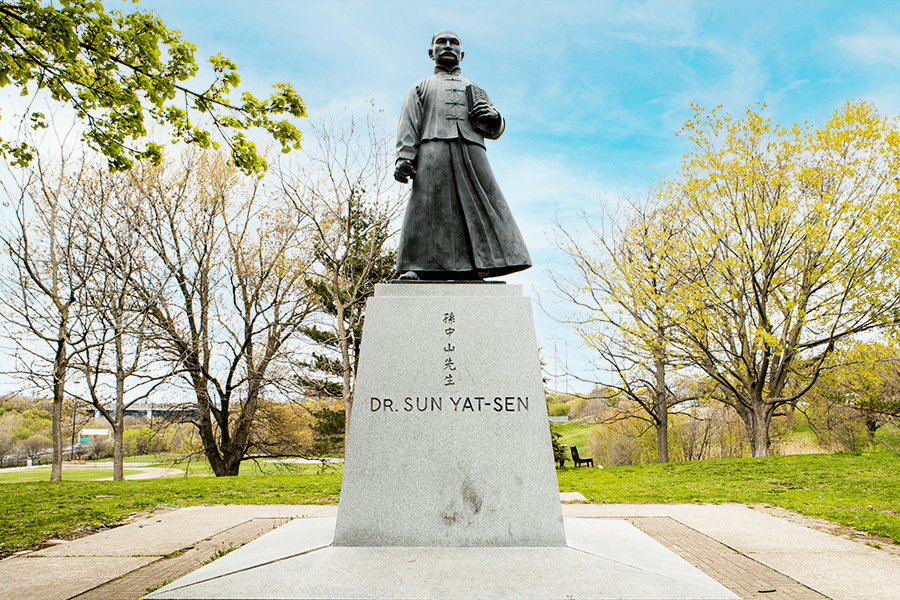 It comes almost from out of nowhere as you’re walking the path that leads from the Don behind Gerrard into south Riverdale Park. Looking imperious high on a pedestal atop a swale surrounded by trees is a memorial to a mysterious figure.

When it was erected in 1985, it was easy for the statue of Sun Yat-sen to get lost standing there in the shadow of two of the more recognizable architectural gems in Toronto – the former Riverdale Hospital round and the Italianate stylings of the Don jail. But the demolition of the round to make way for Bridgepoint Health, an award-winning building in its own right, has given the sculpture of the Chinese revolutionary new prominence.

Sun was the leader of the nationalist movement that was born to overthrow China’s Manchu emperors. The memorial to him occupies a significant place in the history of East Chinatown – it was financed by Chinese Vietnamese and mainland Chinese immigrants who established businesses in the area in the 70s.

While most Torontonians may associate Chinatown with the stretch of Spadina near Kensington Market, it’s only one of several Chinatowns in the city. As inevitable increases in property values pushed out businesses who couldn’t afford rents on Spadina, many moved to the area east of Broadview.

The area’s notoriety grew in the 80s as the Pearl Court restaurant became famous for its dim sum. But unlike what happened along Spadina where rapid development saw mom-and-pop groceries and retail joined by malls, East Chinatown remained a hub.

Many local businesses were almost priced out of existence as Toronto’s bid for the 2008 Olympics saw massive development south of the neighbourhood push property values through the roof. Some businesses migrated further north to Richmond Hill and Scarborough. But many stayed. An archway erected in 2009 at Gerrard and Broadview today commemorates the Chinese pioneers, labourers, railway workers and descendants of Chinese immigrants who came to Canada. Theirs is a story of resilience.

How the statue Sun came to pass is a tale of intrigue. Sun reportedly visited Toronto and gave a speech at Victoria Hall as part of a clandestine tour to Canada to raise funds for his cause just before his death in 1925.

The statue was created by artist Joe Rosenthal, who was selected after a national competition. It’s not the only statue of Sun in the city – another stands at the entrance to the Chinatown Centre on Spadina. In Rosenthal’s version, Sun is holding his book, The Three Principles Of The People – nationalism, democracy and socialism.

Not as well known outside China as his revolutionary contemporary, Chiang Kai-shek, Sun is regarded as the father of modern China. The statue dedicated to him in Riverdale Park reads in part: “Dr. Sun Yat-Sen, also known as Sun Wen, was a native of Tsu-Heng village Chung Shan District in Kwantung Province.  A devout Christian, he studied medicine in Hong Kong and took upon himself the task of overthrowing the tyrannic Ch’ing Dynasty and of establishing a republic of democracy and freedom.”