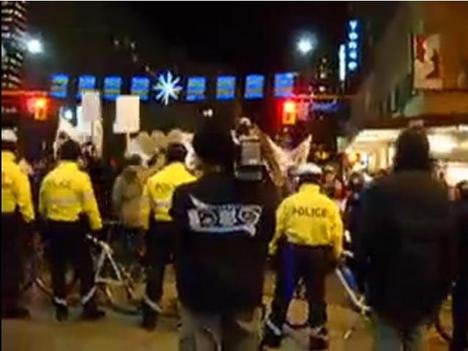 The Toronto group of almost 100 came from several activist groups including No One is Illegal, the Olympic Resistance Network and the Council for Canadians.

They gathered at Queen’s Park an hour earlier, marched to Yonge and Dundas and approached Yonge and College from there, breaking through crowds waiting to watch the torch board the College streetcar.

The cause is a mix of different issues, but mostly the Game’s presence on what they charge is “stolen native land.”

The demonstrators filled the intersection where they were met with boos from the waiting crowd and dispersed literature warning against the “greenwash of the greed-Olympics.”

They moved north to meet the procession close to Wellesley St. where they were met by 30-40 crowd containment police who followed them up.

There wasn’t any obvious violence and the whole thing reached a crescendo when the police moved in on foot and horseback to clear the street, after which the precession turned around anyway, taking University Ave. to Sick Kids, then on to Nathan Phillip’s Square.

According to police they were expecting some for of demonstration and had planned for a sizable event.

The ensuing ceremony was only delayed by about an hour but the protesters met back up with the procession as it entered the Square and mixed in with the largely unsupportive crowd, chanting and managing to block TV camera’s view of the stage with homemade banners.

The ultimate goal was to entirely shut down the national torch run according to one protester. The website that posted the call to arms goes one step further declaring it imperative that they actually extinguish the flame before it reaches Vancouver.

The group holds a similar view in light of the 2015 Pan Am Games and are planning similar demonstrations for that event as well.

More demonstrations have been held in other major Canadian cities along the route, including an almost identical one last week in Montreal where they managed to actually take over the main stage at the city’s ceremony. [rssbreak]