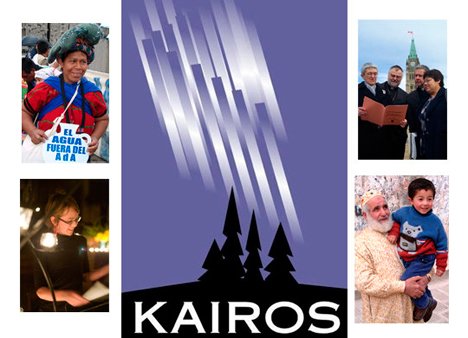 So now the right-wing commissars on the Hill are excommunicating the country’s churches.

The speech of Jason Kenney in Jerusalem December 16, tagging peace and development group KAIROS as anti-Semitic and bragging about de-funding it, was so grotesque that it must have left many in the established Jewish community feeling slightly ill.

Can they really be comfortable with the accusation that an organization composed of Canada’s major Christian churches are Jew-haters? Are they willing to let KAIROS lose its projects in the suffering nations of the global south because, though it believes in Israel’s right to peace and security, it also thinks Palestinians have rights too?

The orthodoxy that any criticism of the Israeli government is an insult to Jews has now done the filthy work of punishing the vulnerable.

After 35 years of CIDA funding, KAIROS will lose $7 million project money ending its support for the peace process in Sudan, for victims of violence in Indonesia and the rights of women in warring Colombia.

So unsettling is the anti-Semitism charge that many are preferring to believe that Kenney really didn’t say what it seems he said. Rosie DiManno in Monday’s Star argues that the minister of citizenship, immigration and multiculturalism didn’t overtly accuse KAIROS of anything but merely opined that the group had taken “a leadership role in the boycott” of Israel.

That’s the tack the Canada Israel Committee is taking too. When I ask Sara Saber, the organization’s executive VP how at peace she is with the idea of labeling the Christian activist community this way, she says, “It’s not clear to me that that’s actually what the minister said.”

I suggest some textual analysis.

The paragraph before the KAIROS reference in Kenney’s speech to the Global Forum Against Anti-Semitism talks about how his government has “implemented a zero tolerance approach to anti-Semitism.” He then proceeds to rhyme off three deeds to this effect: cutting funds to the Canadian Arab Federation, ending contact with the Canadian Islamic Congress – and finally de-funding KAIROS.

“I don’t know how you could ever say that there’s no implication that we’re anti-Semitic,” exasperated KAIROS exec director, Mary Corkery, tells me.

“It wasn’t a side comment that came out over lunch or at a cocktail party. It was very consciously placed. That makes anyone who’s spoken out frightened. I have personally always supported the state of Israel. But it doesn’t mean one can’t be critical. I criticize my husband though I love him dearly.”

The weirdness in all this is that KAIROS doesn’t support an actual boycott of Israel. You can see it right there in bold in their key mid east document.

DiManno, nevertheless, accuses the organization of tinkering with the vocabulary. KAIROS is, she charges, “at the very least, disingenuous and dissembling.”

No, I don’t think so. Let me offer that the group is actually subtle and discerning. Their policy calls for researching “products made in Israeli settlements in the occupied Palestinian territories…as well as corporations that have operations in settlements.”

It’s a milder proposal than that of Israeli peace group, Gush Shalom, which urges shunning goods made in the settler economy. This is all pretty clear and not at all “dissembling” unless, of course, you think the occupied territories are Israel proper.

The government of Canada doesn’t think they are.

If you check the Foreign Affairs and International Trade website you can still discover (click on fast because I predict this is going to be ripped down any minute) that “Canada does not recognize permanent Israeli control over territories occupied in 1967. As referred to in UN Security Council Resolutions 446 and 465, Israeli settlements in the occupied territories are a violation of the Fourth Geneva Convention.”

Exactly the point KAIROS is making. In fact, the organization has always insisted its stand is consistent with Canada’s, though as everyone knows, it’s getting hard to say exactly what our foreign policy mission is these days as it careens wildly into nut fringe territory.

Oh, and there’s one other thing to note about KAIROS – not exactly a shocker, but hey, it’s pacifist. It campaigns everywhere, against arms makers and other corporations abetting violence and suggests shareholder action against companies doing business in Israel or the occupied territories. But – and this is the point: only those “contributing directly or indirectly to violence, occupation or other human rights abuses.” No particular offense, Israel – just plain old anti-militarism here.

Corkery is right anyone who makes a peep of protest against collective punishment home demolitions or starving out civilians has to steel themselves for the defamation.

Yes, there are anti-Semites – even in Palestinian support groups, and when activists come across them, they know exactly what to do. I’ve seen it myself.

But the smear game has to end here.[rssbreak]