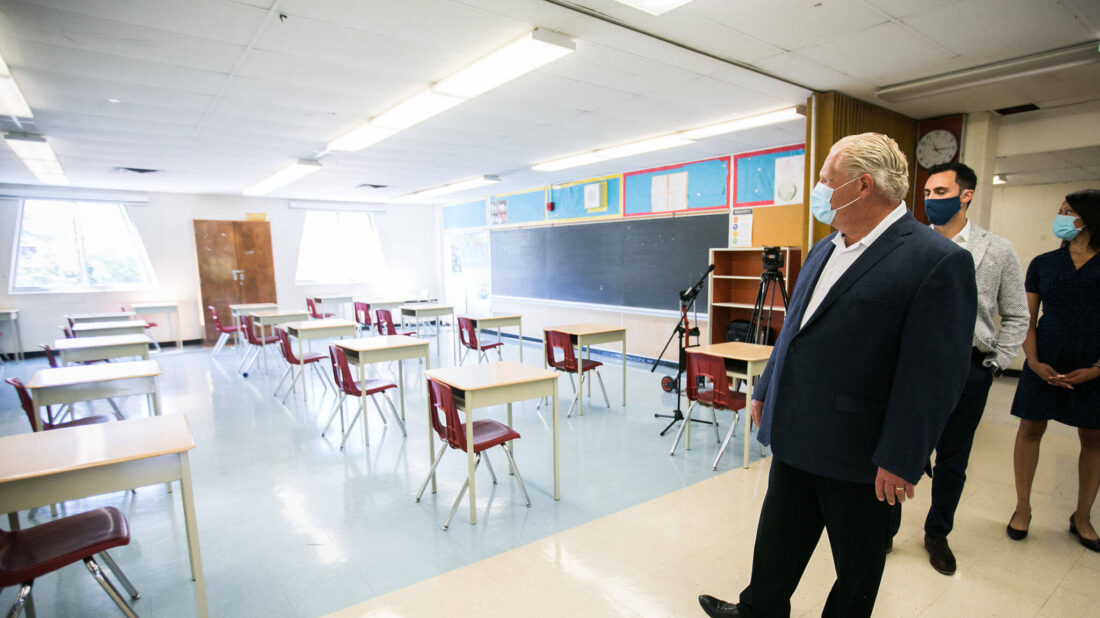 As long as hospitals are not full we’re okay, right?

Re Toronto Schools To Reopen On February 16 (NOW Online, February 3). There were 67 deaths on the day it was announced by the province that schools will reopen on February 16. It’s an obvious success story. Full speed ahead. As long as the hospitals don’t complain we are okay, right? I mean keeping the hospitals at less than maximum capacity is the goal not reducing the number of deaths right?

Holes Emerge In Jamal Francique Police Shooting Probe (NOW Online, January 29). Letter-writer Harry Jaglalsingh states that “this reported investigation of the death of Francique by a cop, is time wasted.” If this same article were posted on a platform that consists of Black readers worldwide would he reconsider it “a waste of time?” I strongly believe the Black world would enjoy reading this article and having a conversation. Police around the world act like this towards Black people.

The Golden Globes Are Stupid, And What Else Is New (NOW Online, February 3). I don’t know if you’re allowed to say this in 2021, but after reading Norman Wilner’s diatribe on the Golden Globes, my opinion is that I always felt like the Holywood Foreign Press Association were a bunch of Borats running around saying “Niiiiice”.

Regarding your podcast on How To Fix Toronto Real Estate’s Missing Middle Problem. Multi-unit homes are a fantastic middle-ground between detached homes and condos, I just wish they didn’t look like they were built in Minecraft. These buildings need some beauty and character added into the design. One of the most charming things about Toronto neighbourhoods is that no two houses look alike, and so it breaks my heart to see these grey boxes! Where is the joy?

Why are we continuing to accept the exploitative pretence of Bell Let’s Talk? The facade of this marketing strategy fades a little more every year, but in the midst of a pandemic, Bell Media’s campaign decisions have progressed from a lacklustre non-effort to openly offensive. We so desperately need expanded mental health services and increased access to inclusive support. But it’s important to decipher which actions are taken for commercial gain versus public benefit.

Their year’s astoundingly out of touch promotional video features Michael Bublé wandering through his mansion, golfing, playing hockey, and eating chips in his home gym. Bublé assures us that watching him perform these innocuous activities for almost a full minute “supports mental health”, as Bell donates five cents to an unnamed assortment of Canadian mental health initiatives each time it’s viewed.

Some useful contributions Bell might have considered making in addition to their financial donation (by way of a tax writeoff) is providing those who lost their job due to COVID with free or reduced costs for their services, or unlimited Canada-wide phone calls during the month of January to help us stay in touch. We must hold Bell Media to a higher standard.

The cancellation of the Keystone XL pipeline was the kind of action climate scientists and social movements have long been calling for. Let’s hope it’s the first of many such actions by the new President Joe Biden.

Canada needs politicians who understand that the fossil fuel era is ending and act accordingly. Justin Trudeau could be this kind of politician. But he would need to move past simply sounding like a climate leader and start acting like one. That means, he would need to start moving forward with things like the Just Transition Act he promised back in 2019. We still haven’t seen that important legislation, but now would be a perfect time for Trudeau to finally deliver.

In recent months there have been initiatives to rename places named after slave owners or those who supported slavery. In Toronto, Dundas Street has been the primary focus for this issue. It has also been agreed to rename what was previously known as Vaughan Secondary School in the municipality of Vaughan, named after slave owner Benjamin Vaughan.

The results of a survey have shown that the first choice is to rename the school after Somali-Canadian journalist Hodan Nalayeh and the second choice is American Holocaust survivor and Nobel Prize winner Elie Wiesel. Some of those who oppose Nalayeh have been accused of being racist and some of those who oppose Wiesel have been accused of being anti-Semitic.

My personal suggestion would be African-American mathematician and computer scientist Dorothy Vaughan. She was one of the “human computers” in the early days of the American space program and her career continued into the computerized era at NASA. Earlier in her career, she had been a high school teacher. She would be an excellent role model for high school students especially young women and racialized students.

If the school board would prefer a Canadian, I suggest poet and playwright R.M. Vaughan.