Two-hand version of Shakespeare’s tragedy goes into the bedroom 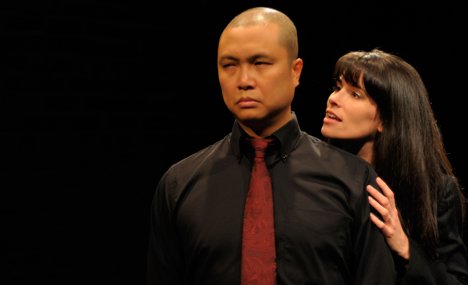 Director Thomas Morgan Jones’s take on Macbeth, stripping the play down to Macbeth (John Ng) and Lady Macbeth (Mary Ashton), focuses on their private life as well as their public appearances in a world of high-class parties.

At the start, the pair are a contemporary couple with a strong love/lust connection they’re having sex almost as soon as Macbeth returns home from war.

As in the original, the witches’ prophecy of power (or maybe the temptation of power) drives the two to acts of violence, acts that work insidiously on their relationship.

Hanging mirrors literally back up the action, with additional mirror shards at the stage edge creating a barrier hemming in the characters. The doubled versions of Macbeth and his lady are often effective, such as when Lady Macbeth steels herself to the bloody deeds ahead it’s as if she’s using her own image, her own inner darkness, to conjure malevolent powers.

The text – drawn from the original script but not always from Macbeth and Lady Macbeth’s speeches – here becomes dialogue or is used as exhortations to move themselves further into evil.

Kelly Wolf’s set and costumes and David DeGrow’s lighting emphasize red and black, giving a visual quality to the imagery of blood and darkness. Thomas Ryder Payne’s sound design blends animal-like calls and evocative knocks and bells to suggest the production’s unseen presences. He also makes surprising use of a brassy, big-band tune during the murder of Banquo and the banquet that follows it I can see the trombone slides as daggers, plunging again and again into the dead Banquo.

Ng is too diffident in the first part of the play his hesitancy in reacting to the witches’ words makes him a figure with little presence. When Macbeth finally takes action, though, Ng develops a steely firmness that works well, driving the character forward into a self-centred, fearful, isolated world.

Ashton’s the stronger performer, seductive from the start and filled with desire for a success that’s partly for her mate, partly for herself. Her Lady Macbeth is good at using both body and words to entice her mate onward to bloody deeds.

The banquet scene in which Macbeth sees Banquo’s ghost is key here. We start to see a change in the couple’s relationship, but that change needs more playing out than the abrupt ending allows.[rssbreak]