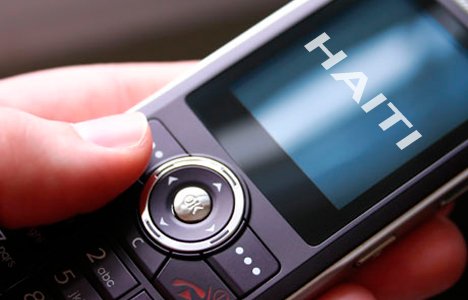 When Haiti was hit by a 7.0-magnitude earthquake last week, Port-au-Prince-area native Wyclef Jean went on CNN to plead for donations to his ravaged homeland.[rssbreak]

He gave the URL to his charitable foundation, Yéle Haiti, and a six-digit number to text a donation to.

Send the keyword YELE to a number known as a shortcode, and $5, added to your cellphone bill, would go toward aid to Haiti, he promised.

Anyone in Canada who followed instructions and attempted a mobile donation, however, was stonewalled. Donate by other means, a text sent back essentially read.

In fact, for days after the disaster, any attempt to donate via text message was impossible.

Not until Thursday afternoon did the Mobile Giving Foundation team up with the Salvation Army to offer a text donation option in Canada. And even that was only through Bell and Rogers Telus joined the rest on Friday.

Text donations to Yéle are still not an option.

By the time Canada was texting aid, the U.S. had amassed almost $5 million a day in mobile donations.

For Canada, it was an opportunity missed. For Haiti, the result was harsh.

Over the weekend, Canadian texters donated roughly $125,000 to Haitian relief. Had the telecoms and charities been prepared and avoided the two-day delay and the accompanying confusion, it might have been twice that.

Mobile money is the future of fundraising. Simple, fast, portable and done without a credit card, micro-donations using text messages have raised a spectacular amount of money for aid in Haiti – passing $25 million in the U.S.

Philanthropy, once the hobby of the rich and the burden of the charitable, is now the duty of anyone with a cellphone.

But in Canada, wireless donation was caught up in an unfortunate ball of red tape – or at least a serious lack of foresight.

“You have to abide not only by wireless technology, but also by the tax laws of both countries. That’s the complexity we face internationally, and that’s why you see a little bit of lag time in Canada,” Jim Manis, CEO of the Mobile Giving Foundation, which organizes the bulk of mobile donations in Canada, told me.

And there are other challenges beyond that. The telecoms process cellphone bills every month and give their customers a month to pay. That means delaying help in Haiti’s crisis by up to 60 days.

In the U.S., carriers like Verizon have solved this problem, fast-tracking mobile donations to those in need.

To make a text donation in Canada:

Text the word “Haiti” to 25383 to donate $5 to the International Rescue Committee.